Alaska lawmaker blasted airline for ‘mask tyranny.’ Now she’s banned from the only flights to the capital. 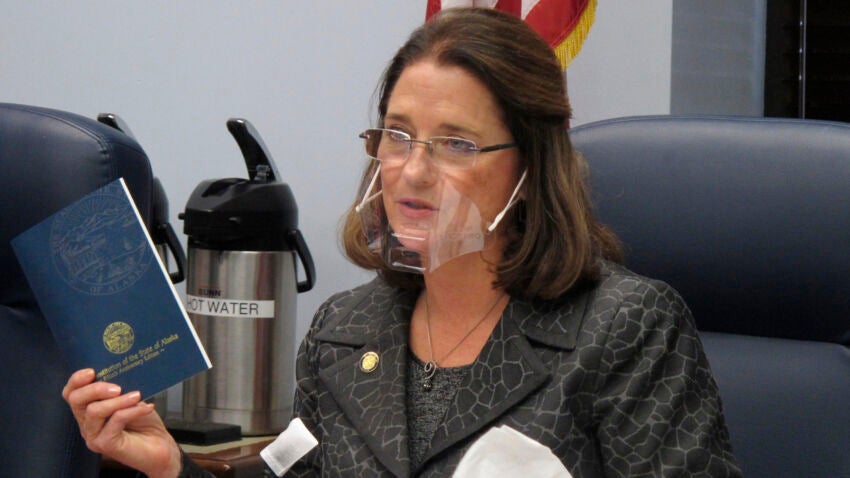 Last week, a police officer responded to an Alaska Airlines terminal in Juneau as state Sen. Lora Reinbold clashed with staffers over mask rules. It was a familiar battle for the Republican lawmaker, a vaccine skeptic who has blasted flight attendants as “mask bullies” and accused the airline of “mask tyranny.”

Now, she isn’t welcome on their flights at all. Alaska Airlines this weekend banned Reinbold “for her continued refusal to comply with employee instruction regarding the current mask policy,” the airline said in a statement to The Washington Post.

That’s a serious problem for the lawmaker, because Alaska Airlines operates the only regular flights to the state capital from her home in the Anchorage area, the Anchorage Daily News reported. Reinbold scrambled on Sunday to get to Juneau via an arduous 14-plus-hour car ride, including a jaunt through Canada, to reach a ferry to the capital.

“Alaska I went to new heights to serve you & have a new appreciation for the marine ferry system,” Reinbold posted on Sunday night.

Reinbold also lashed out at the airline, claiming that her latest fight over mask rules was caused by “uptight employees at the counter” and arguing that Alaska Airlines was wrong to publicly confirm that she had been banned.

“Alaska Airlines sent information, including my name, to the media without my knowledge nor permission. I do believe constitutional rights are at risk under corporate covid policies,” she wrote on Facebook.

The state senator is the latest Republican to push back against corporate and government policies mandating mask use, even as health officials have urged Americans to continue adhering to the rules as more contagious variants have continued fueling the coronavirus pandemic.

Reinbold, who represents Eagle River, a suburban district north of Anchorage, served in the Alaska House from 2013 until 2019, when she won a Senate seat. As the pandemic took hold in Alaska and much of the United States, she emerged as one of the loudest voices in Juneau against restrictions.

As chairwoman of the state Senate Judiciary Committee, she used hearings to take direct aim at Republican Gov. Mike Dunleavy’s pandemic rules, regularly calling witnesses to dismiss the effectiveness of masks and other policies. She also refused to wear a face mask in the Capitol, instead donning a clear shield over her mouth.

She’s faced consequences for her stance, even from her Republican colleagues. In February, Dunleavy said his administration would no longer participate in any hearings she chaired, accusing her of using her position to “misrepresent” covid-19 policies.

“I will not continue to subject the public resources of the State of Alaska to the mockery of a charade, disguised as public purpose,” Dunleavy wrote in a letter.

Last month, she was banned from most of the Capitol for refusing to follow mask rules.

Outside of the legislature, meanwhile, Reinbold has taken particular umbrage at Alaska Airlines rules requiring her to mask up on flights. In November, she posted a screed to Facebook to complain that a “scaredy cat Karen whined loudly and was a Tattle tail when I took my dumb worthless suffocating mask off, a bit longer than she wanted, for my food and drink.”

In a later post, she encouraged travelers to evade Alaska’s rules requiring a negative coronavirus test to enter the state, writing “sneak by if you are bold [for] they cannot force you.”

Last week, bystanders filmed her arguing with Alaska Airlines staffers in Juneau, including one man who instructed her to pull her mask up over her nose. A police officer at the airport responded to the scene but “didn’t take any enforcement action,” the Juneau Police Department told the Daily News.

“I was reasonable with all Alaska Airlines employees. . . . I inquired about mask exemption with uptight employees at the counter,” she wrote, suggesting that the timing of her ban was politically motivated to cause her to miss votes in the Senate.

She is now one of more than 500 people banned from Alaska Airlines flights over failure to adhere to mask rules, the Daily News reported. The airline said in a statement that her “suspension is effective immediately pending further review.”

Sign up and receive coronavirus news and breaking updates, from our newsroom to your inbox.