Angels revamped their bullpen after last season. It hasn’t mattered 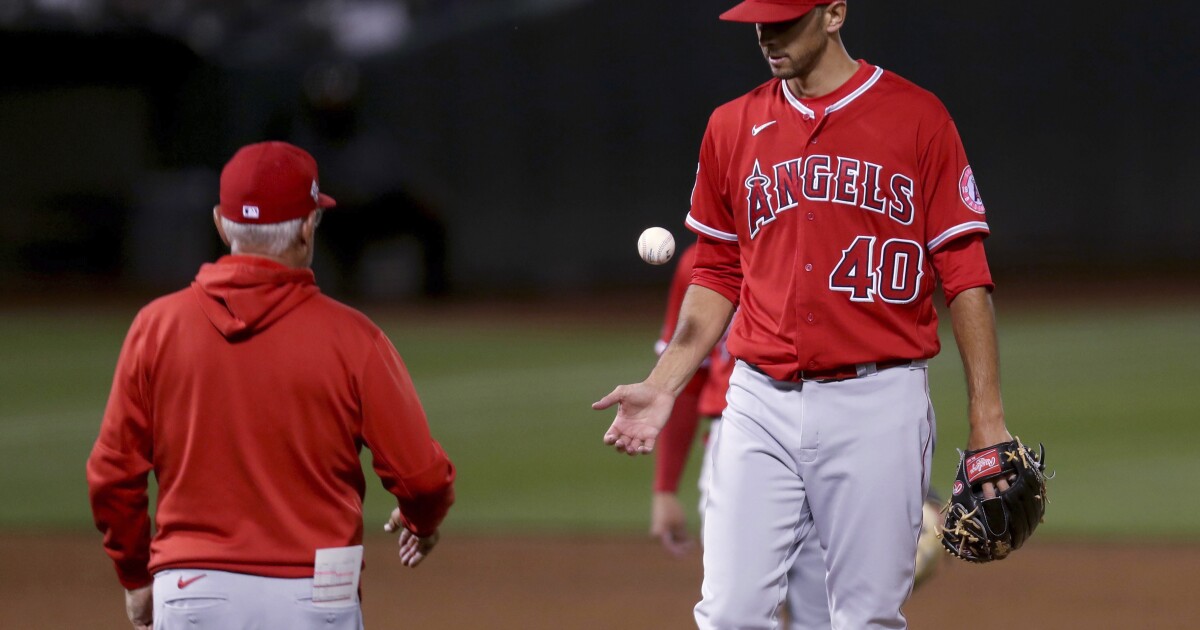 The moves started in the winter, with the arrival of Raisel Iglesias, Alex Claudio, Aaron Slegers and Junior Guerra.

They continued throughout the spring, continuous tweaks that culminated with the additions of Steve Cishek and Tony Watson, and the promotion of prospect Chris Rodriguez.

By opening day, the Angels’ 2021 bullpen looked almost entirely different from the year before — “dramatic” changes, as general manager Perry Minasian described it at the time, that the team hoped could improve performance in one of the most critical areas.

“We have to do better out of the bullpen,” Angels manager Joe Maddon said Tuesday. “There’s no question about it.”

Iglesias has been solid as the closer, but almost everyone in front of him has struggled to find consistency.

And, after the group faltered again in a two-game sweep against the Oakland Athletics this week, the manager was left struggling to find answers.

“We didn’t play bad until we got to the bullpen,” Maddon said of the series. He later added: “We have to be able to rely on the bullpen in different situations to get us through. That’s how we’re going to win on a consistent basis. That has to happen.”

To this point it hasn’t. This week presented some of the most frustrating examples.

On Monday night, after a scoreless six-inning start from Shohei Ohtani, Steve Cishek gave up a three-run homer three batters into the seventh, blowing open what had been a scoreless game en route to a 4-1 defeat.

On Tuesday afternoon, the Angels were trailing by only two when starter José Suarez walked off the mound with two outs in the sixth inning. But the two baserunners he left behind immediately scored when Mike Mayers — the lone holdover from 2020 — gave up a double.

“We just have to become more consistent,” Maddon said. “We don’t have to be perfect. … They’re not going to be perfect, I get that. But when you get to this time of the year, in big moments like that, we had chances to pull out both of these games. And we were unable to do so. They had big innings once we went down to the ‘pen.”

There were other reasons the Angels went winless in Oakland — a setback that left them 7 1/2 games behind the A’s in the American League wild-card standings.

Their banged-up lineup produced one run in the two games. Their defense was far from flawless. And they never held a lead in either contest.

But afterward, it was the bullpen that Maddon discussed the most, frustrations clearly mounting following the latest round of failures.

“We have to get that figured out,” Maddon said.

As they rebuilt the bullpen this offseason, the Angels saw potential advantages in the personnel they brought in.

The group included all sorts of different deliveries and styles. Iglesias was known for throwing upper-90s fastballs. Mayers had shown promise with a newly developed cutter. Watson, Claudio and Cishek all presented funky side-arm motions. And Slegers’ 6-foot-10 frame gave him an exaggerated release point.

Maddon and the front office liked the wealth of experience too, as well as the fact that most of the new faces had pitched well in the shortened 2020 campaign.

There were still obvious questions about the group, which didn’t include any big-money free-agent signings and also lost Ty Buttrey to an unexpected retirement at the start of the season.

But the Angels maintained optimism they had compiled enough depth and talent to make at least marginal improvements upon a unit that had blown the most saves in baseball the year before.

“There’s a lot to like about it,” Maddon said near the end of spring training.

So far, outside of Iglesias’ 3.40 ERA and 19 saves, there have been few success stories.

While Cishek (3.48 ERA in 47 games) and Watson (4.45 ERA in 33 games) have largely been solid, Cishek has also struggled with walks, Watson spent a couple weeks on the injured list, and both suffered a few blow-up outings that ballooned their numbers.

Mayers has taken a backward step from a strong 2020, surrendering too much hard contact as his ERA has risen to 4.53.

Neither Claudio (5.51 ERA), Guerra (5.10 ERA) nor Slegers (who was optioned to triple A) have met expectations either.

Elsewhere, Rodriguez showed promise early in the season but then got hurt, struggled upon his return, and last month was sent to double A to be stretched out as a starter.

Hunter Strickland was acquired from the Tampa Bay Rays in May, only to be released a few weeks later after giving up nine runs (seven earned) in nine games.

None of the other offseason additions have made much of an impact on the big league roster.

The Angels’ rotation hasn’t helped ease the load. Entering Wednesday, only four other teams had bullpens with more innings pitched than the Angels. And when Maddon has let his starters work deep into games, they’ve often left behind a mess (Angels starters have a 7.79 ERA and .319 opponent batting average in the sixth inning or later).

Poor defense has been another problem, especially behind a relief corps that pitches to a lot of contact (the bullpen has a ground ball rate of nearly 50%).

And now, with the July 30 trade deadline approach, the Angels will have to decide whether it makes more sense to trade away players on expiring contracts such as Iglesias, whom Maddon identified as the “anchor” of the group but could receive serious interest from other teams after posting a 2.23 ERA in his last 27 games.

On Tuesday, Maddon still tried to hold out hope for improvement, keenly aware that any late-season playoff push will require a turnaround from the back end of the pitching staff.

“We have to be more consistent there for us to really get where we want to be,” he said.

The evidence that might happen, though, remains in short supply. For a team that hoped it was getting a new-look bullpen this season, the results sure have looked the same.

The Angels agreed to terms on a contract with first-round draft pick Sam Bachman, according to a person with knowledge of the situation, with the right-handed pitcher set to earn a signing bonus of $3.85 million. That amount is a little more than $1 million under the slot value for the ninth overall pick, which is where the Angels selected the Miami (Ohio) product in last week’s draft.