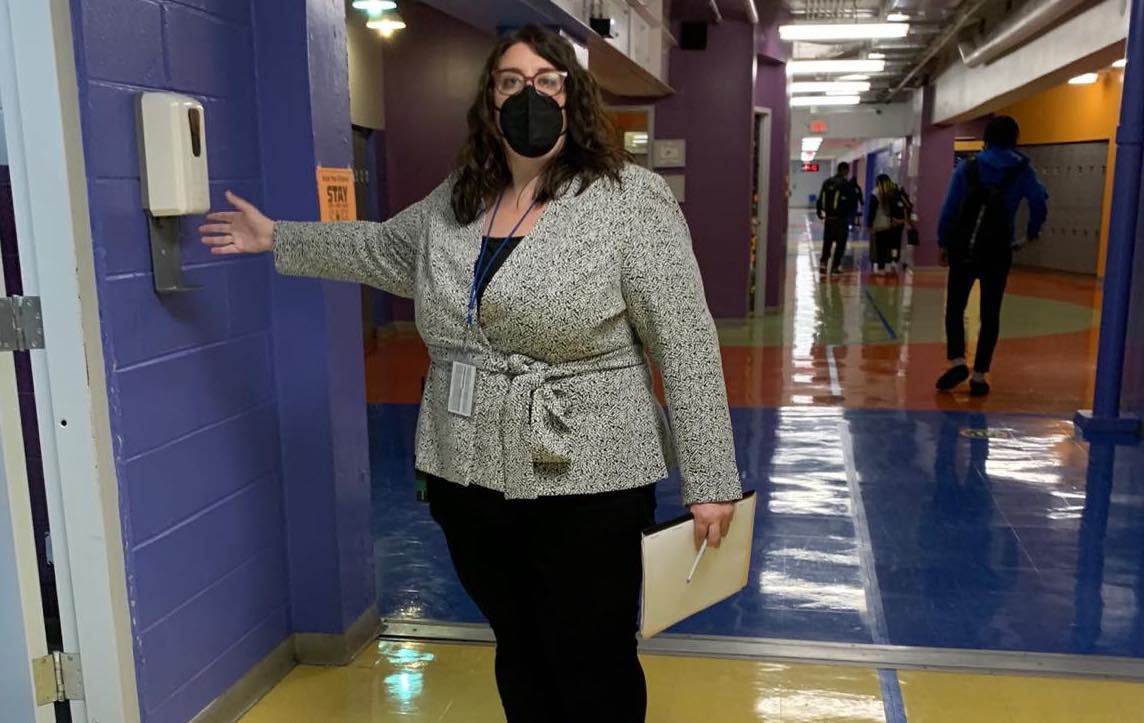 Sharon Brewer is getting the chance to spend at least some of her senior year in school, in person.

It didn’t come a moment too soon.

“I was doing terrible at home,” she said.

Same for her classmate, Parris Boyette.

“It’s the best thing that happened to me,” said Boyette, a 17-year-old basketball player, about returning to school in person last month. “My grades are going up, I’m understanding more. When I was home, I was not paying attention. Here, I’m paying attention.”

The two are students at Mastery Charter School-Pickett Campus in Germantown, a combined middle and high school with grades 6-12 that reopened for in-person school more than a month ago.

Unlike the Philadelphia school district, which won’t bring back 10th to 12th graders this school year, Mastery has tried to bring back as many students as possible in all grades in its 18 schools across the city. The charter network, which enrolls about 14,000 students, started hybrid learning back in March, with some starting in April, and has moved its students phase-in at a faster pace than the district.

Most students are back two days a week, except for those with special needs, who can come in four days.

“It is indisputable that in-person learning is what’s best for students,” said Mastery CEO Scott Gordon. Its internal assessments indicated that students learning at home were attaining less academic growth than in a typical year, he said. At the same time, he said, they were also showing “greater levels of depression and anxiety” as levels of gun violence hit historically high levels.

As a result, “we made it an absolute priority” to maximize in-person learning,” including for older students, he said.

While the district also sought an early and fuller return to school buildings, it was a rougher road, exacerbated by deep distrust over dangerous building conditions. After a protracted dispute with the teachers union over school safety that was finally settled through mediation, the district has brought back students in phases. Students in prekindergarten to second grade began hybrid learning in three waves in March, followed by students in third to fifth grade this week. By May 10, sixth through ninth graders can begin in-person learning, most for two days a week. The school year ends on June 11, meaning the last eligible students will have just 10 days of in-person learning.

Most high school students won’t be back this school year.

“We’ve said this before, we understand this is not the school year any of us have envisioned,” said Monica Lewis, the district’s spokeswoman. “Those in high school, particularly seniors, are probably disappointed. They have missed out engaging with friends and doing activities typical of high school life. But this was the plan most in line with efforts to get through the pandemic as safely as possible for all students and staff and school communities as well.”

To help students who might have fallen behind, the district is beefing up its summer offerings, providing credit recovery courses, and encouraging families “to reach out to school to see what services are available,” she said.

Keylisha Diaz, one of two student representatives on the Board of Education and a junior at Philadelphia Military Academy, a district school, has been keeping in regular touch with seniors and other high school students advocating for their needs. Seeing the process up close, she said she has developed a keen appreciation for the hard choices faced by the district’s leadership.

At the same time, she said, “It’s very upsetting seniors didn’t get the experience they were hoping for.” At this point, however, given how late it is in the school year, most of those she has spoken to have made their peace and “are fine with staying virtual.”

Instead, she said what they are looking forward to are the end-of-year rituals, especially graduations, which the district has said will be held outside. It is also providing free caps and gowns to students. Proms, however, will not be held.