Biden’s Foreign Policy Takes a Back Seat to Domestic Priorities 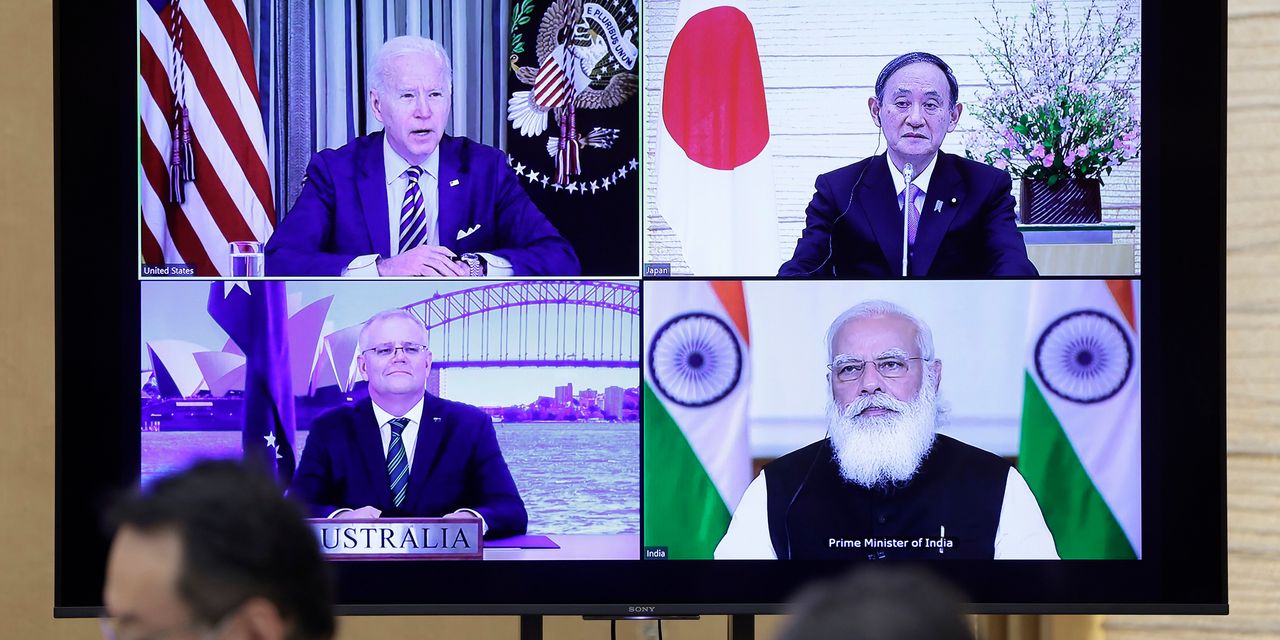 has changed the tone and direction of U.S. foreign policy, but shied away from big new initiatives or direct confrontation with adversaries as he seeks to focus on challenges at home.

Mr. Biden, fulfilling campaign pledges, has moved quickly to shore up U.S. alliances—particularly in East Asia, where China’s challenge looms. He has rejoined international pacts, such as the Paris climate agreement, and sought to reinvigorate American leadership on human rights from Myanmar to Saudi Arabia.

The president’s determination to focus mainly on domestic priorities—the Covid pandemic, the U.S. economy and a proposed $2 trillion infrastructure bill—faces potential tests from a bevy of global adversaries, officials and foreign-policy analysts say.

“The problem, as always, is that foreign policy does not go away. Russia, China, the Middle East, the Iranian bomb—and Biden is being tested by all of America’s rivals all at once,” said

publisher-editor of the German weekly Die Zeit and a fellow at Stanford University’s Hoover Institution.

“This three-months-old foreign policy is still in an experimental mode,” he said. “Rhetorically, the Biden administration is hitting all the right notes: speaking up against Russia and China, making the right pro-alliance moves in Europe and East Asia.”

“Our view is that we don’t have that luxury to choose between those challenges,” a senior administration official said. “It was clear from the first 100 days that we face an increasingly assertive China and disruptive Russia. At the same time we face challenges that don’t respect borders, including climate change, Covid-19 and a technological revolution.”

Mr. Biden’s biggest break with his predecessors so far is his order, overriding military advisers, to withdraw all U.S. troops from Afghanistan while he is in office. Last month, he announced the troops would be home by Sept. 11. The move comes with risk, U.S. officials acknowledge, and could pose a challenge for the president if the country rapidly descends into bloodshed and chaos.

The stiffest test for Mr. Biden and his foreign-policy team is likely to come from Beijing, whose leaders are making clear they now see China as an equal with the U.S. on the world stage.

At the first high-level U.S.-China meeting of his tenure in March, as news cameras rolled, officials from Beijing responded to American criticism of China’s actions in Hong Kong and against the Uyghur minority with their own blistering critique of U.S. domestic troubles.

China also has increased pressure on Taiwan, which it considers a renegade province, upping the number of military aircraft sorties it flies near the island.

What has changed, some observers say, isn’t the U.S.-China relationship, which has soured in recent years, but the man in the White House. Former President

“was so unpredictable that the Chinese were much more careful not to ruffle feathers,” said one administration official. “They’re still testing the waters with Biden to see what they can get away with.”

And he has given priority to alliances. Among his first online summits was a meeting with other leaders of the “Quad”—Australia, India and Japan—a grouping to counter China’s expanding influence in Asia. He dispatched Secretary of State

was the first foreign leader to visit Mr. Biden at the White House.

“Japan is the Exhibit A of the success of the policy of going back to an alliance-centric foreign policy,” said

a lecturer in East Asian Studies at Stanford.

Mr. Sneider cautioned that Asian allies welcome Mr. Biden’s outreach, but Japan, and particularly South Korea, are wary of Washington dragging them into an all-out confrontation with China given their commercial interests there.

Mr. Biden could also face further tests from Russia, which recently amassed a threatening show of military force along its border with Ukraine.

The president has so far pursued a balanced policy toward Moscow. He imposed sanctions over the

hack that U.S. officials blame on Russia intelligence services and warned the Kremlin over the treatment of imprisoned opposition figure

He also agreed to extend the New START nuclear-arms deal, and has proposed a summit with Russian President

“They’re feeling their way, because they can’t decide what they want with Russia,” said a senior U.S. diplomat. “They want everything.”

On North Korea and its nuclear weapons program, the Biden administration will steer around approaches of both immediate predecessors, officials said Friday, without providing details. Mr. Biden will pursue what they called a calibrated policy, different from Mr. Trump’s goal of a grand bargain with Pyongyang or the Obama administration’s policy of “strategic patience.”

How would you grade the administration’s first 100 days? Join the conversation below.

Mr. Biden, known as a foreign-affairs expert during his 36-year Senate career and vice presidency, hasn’t made foreign policy a touchstone of his presidency, at least publicly. He has yet to travel overseas and has given few major foreign-policy speeches—one of which was to announce the Afghan troop withdrawal.

The president weighs both domestic and foreign issues through one lens, the senior administration official said. “Always, the president approaches these issues with a focus squarely on what will make life better, safer and easier for working families, that is our primary metric.”

He also sees domestic renewal as part of a contest with autocratic governments globally. “Authoritarian regimes argue that their system of governance is better equipped to take on the challenges of the 21st century than our democracy. In the first 100 days, we are proving that view wrong and demonstrating that democracies can still deliver,” the official said.

In his address to Congress on Wednesday, Mr. Biden said that his domestic proposals for infrastructure and jobs are also necessary to maintain a competitive and technological edge against rivals such as China, while emphasizing he isn’t seeking conflict with either Beijing or Moscow.

who worked for Republican and Democratic secretaries of state, said, “I’ve never seen an administration where foreign-policy priorities are so influenced by a domestic agenda and the politics that drive that agenda.”

He noted Mr. Biden’s initial moves to dissociate himself from Mr. Trump, including ending a ban on immigration from some Muslim countries and rejoining international efforts to curb climate change. “All of the low-hanging fruit has been picked,” said Mr. Miller, now of the Carnegie Endowment for International Peace.

Mr. Biden, he said, has moved cautiously on nuclear talks with Iran; shown no inclination to tackle perennial puzzles such as North Korea’s nuclear program and the Israeli-Palestinian peace process; and displayed no appetite for deeper involvement in Middle East conflicts in Yemen, Syria and Libya.

He is also trying to turn the page in Afghanistan, a move that is popular at home. But it remains to be seen if he can extricate the U.S. entirely.

“Even if we cut and run now, there’s a chance that the whole country goes to hell in a few months or years,” said a Democratic congressional staffer. “Then we have an Iraq situation on our hands where we have to decide if it’s our moral obligation to go back and fix it before it bites us. It’s a vicious cycle.”

—Gordon Lubold and William Mauldin contributed to this article.