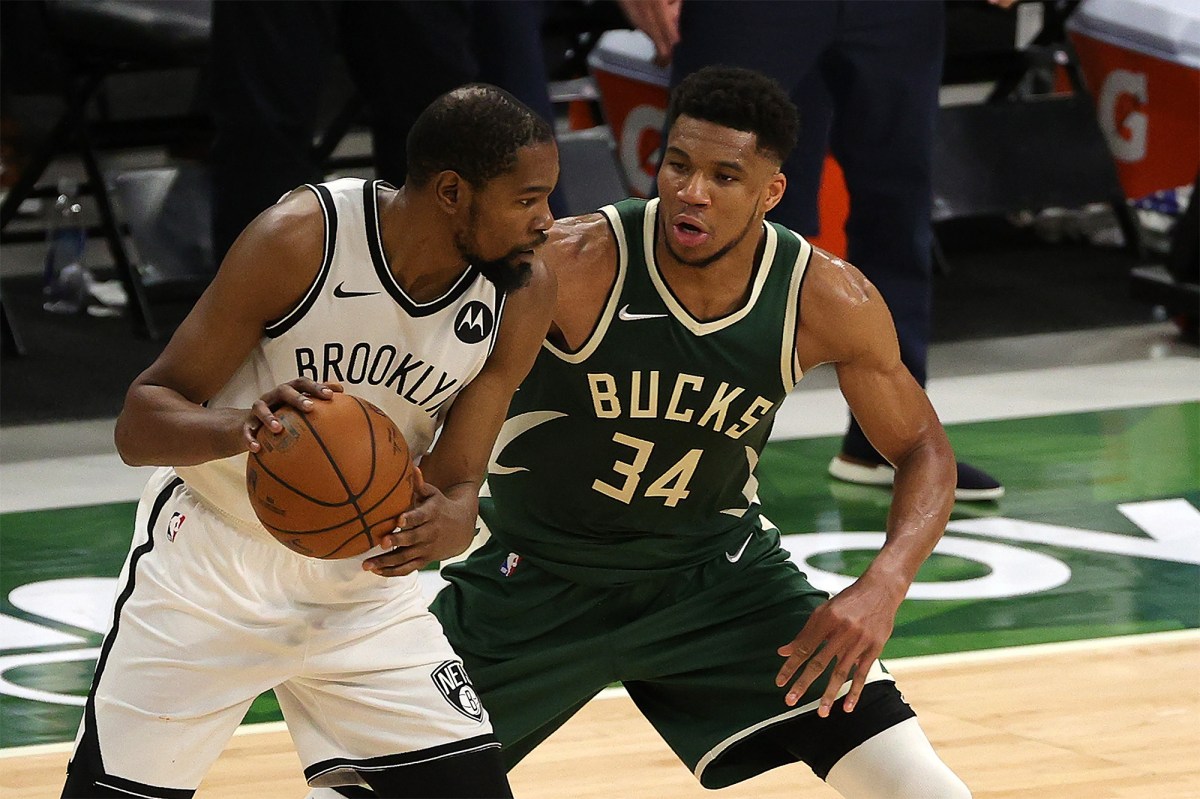 Milwaukee got a huge 117-114 win over the Nets. But despite outdueling Kevin Durant, Bucks star Giannis Antetokounmpo insisted he didn’t win a one-on-one battle with Durant — because it’s not possible.

“I was not going back-and-forth with KD. Nobody in this world can go back-and-forth with KD,” Antetokounmpo said. “He’s been one of the greatest scorers to ever play this game. That’s not the game plan you want to go against. You’re going to his game. That’s where he wants to go. You have to be able to do it together, as a unit, as a team, to be able to guard him, to make it tough on him.”

Durant tied his season-high with 42 points and matched his career-high with seven 3s. But it was the would-be eighth triple that Durant will rue, his turnaround at the buzzer falling just short.

Still, Antetokounmpo poured in 49 points. And after the Nets dared him to beat them with his flawed jumper, the two-time reigning MVP went a season-high 4 of 8 from 3-point range.

Afterwards, he said he grew up idolizing Durant despite dissimilar styles.

“The way he handles the ball and gets to his spot is unbelievable. The best I’ve ever seen in my life,” Antetokounmpo said. “But yeah, I look up to him, I’m not gonna lie. When I was young — 16, 15 — I remember watching him play in the Finals, and I was like, ‘Damn, this guy is really good.’

“But [we have] different games. I enjoy playmaking, finding my teammates, putting them in positions to be successful. … But you have to appreciate players like that because you don’t see them often. There’s one-of-a-generation talent. I’ll steal as much as I can from his game, as much as I’m capable of doing, because there’s some stuff that only he can do. … Growing up, I always looked up to him.”

Nic Claxton was available but didn’t play in Sunday’s loss. After missing his eighth straight game, the Nets want to give him some time to ramp back up to full speed before throwing him back out on the floor.

Jeff Green took a shot to the hip on a drive from Antetokounmpo. He seemed momentarily shaken up but continued to play.

Bruce Brown returned after missing three straight games with a sore knee, and jumped right back in the rotation, albeit logging just 4:40 scoreless minutes.

Mike James’ 10-day contract expires after Sunday. The Nets can offer him a second that would take him near the end of the regular season, but they are unable to offer a third.

Nash deflected to GM Sean Marks when asked if the team had extended James.

“That’s a question for Sean. I don’t want to make any comment on that,” Nash said. “We’ve enjoyed having him for sure.”

Chicago Sky trade Gabby Williams to Los Angeles Sparks for rookie Stephanie Watts — the No. 10 pick in the 2021 draft — and...