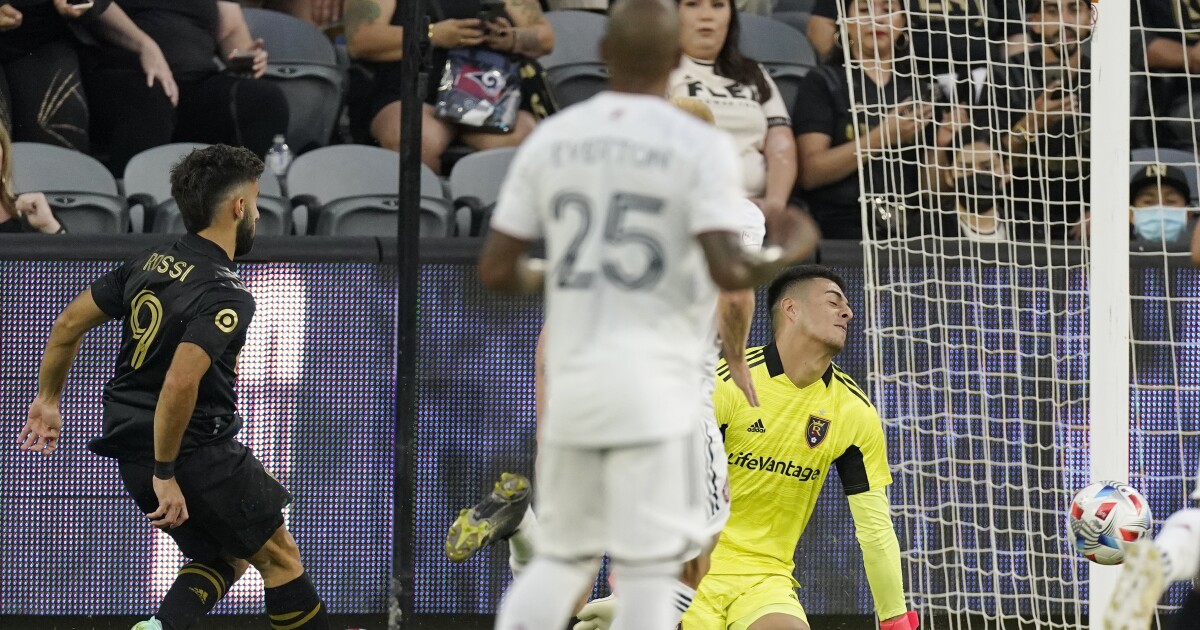 Watching LAFC play defense has been a little like watching Shohei Ohtani bunt or Allyson Felix swim. It’s not what they were made to do.

In LAFC’s case, however, it appeared to be working. Because after getting off to the young franchise’s worst start, Bob Bradley’s team rebounded by playing defense, winning four times in its last five games, the team’s best stretch in nearly two years.

Three of those wins ended in shutouts.

But LAFC looked like its old self again Saturday, with goals from Diego Rossi and Carlos Vela lifting it to a 2-1 victory over Real Salt Lake, extending its winning streak to a season-high three games.

Not that Bradley or his players were resting on those laurels.

“The most important win is the next one,” the coach said. “That’s the way it works.”

This win wasn’t bad, though. LAFC has climb 10 places in the Western Conference standings in the last two months, moving into a tie with the Colorado Rapids for third place with 21 points. Saturday’s game also marked the first time this season that Vela and Rossi, the league’s last two Golden Boot winners, have scored in the same game.

LAFC (6-4-3) attacked from the opening whistle, attempting a season-high 29 shots. But it also played effectively at the other end, holding RSL (4-4-4) to three shots.

“LAFC is a team that is expected to dominate,” defender Kim Moon-hwan, whose assist on Vela’s goal was his first in MLS, said through a translator. “That’s the type of football we want.”

Though Bradley insists a change in strategy has had nothing to do with his team’s changing fortunes, the turnaround coincided with his decision to bench goalkeeper Pablo Sisniega in favor of Tomás Romero.

At 20, Romero is part of a wave of young goalkeepers making their mark in MLS. In May, Portland’s Hunter Sulte played against Dallas just six days after his 19th birthday, becoming the second-youngest starting keeper in league history. Two weeks earlier, Sporting Kansas City started 19-year-old John Pulskamp while RSL’s David Ochoa, who made his MLS debut as a teenager last fall, has started 11 times this season.

Ochoa was fantastic Saturday, matching a career high with eight saves, including one on a Vela penalty kick midway through the second half. And he was busy from the start, with LAFC forcing him into three saves in the opening four minutes before Rossi finally got a shot past him at the end of a well-executed give-and-go with José Cifuentes in the 10th minute. The goal was Rossi’s team-leading fifth of the season.

Aaron Herrera pulled that back for Real Salt Lake in the 18th minute, running on to a pass from Everton Luiz and burying a left-footed shot from just outside the box, ending Romero’s scoreless streak at 198 minutes, the third-longest in team history.

Romero saw only one other shot; LAFC has conceded a league-low 38 shots on goal this season, part of the reason Romero has just 10 saves in five games.

But LAFC kept the pressure on Ochoa, who was equal to the task, making a diving grab of a Raheem Edwards shot in the 49th minute and stopping a left-foot shot from Rossi in the 55th minute.

Vela also hit the crossbar with a shot in the first half and pushed another wide of an open net late in the second half. But all that frustration evaporated when he blasted a Kim cross over Ochoa and into the side netting at the far side in the 79th minute.

“A fantastic finish on the winner,” Bradley said of Vela’s score.

“We have scored more goals. But we created a lot of chances. A really good game just from the collective football on the night.”