GOP reps calling on Pelosi to pay metal detector fine: ‘All members must live under the same rules’ 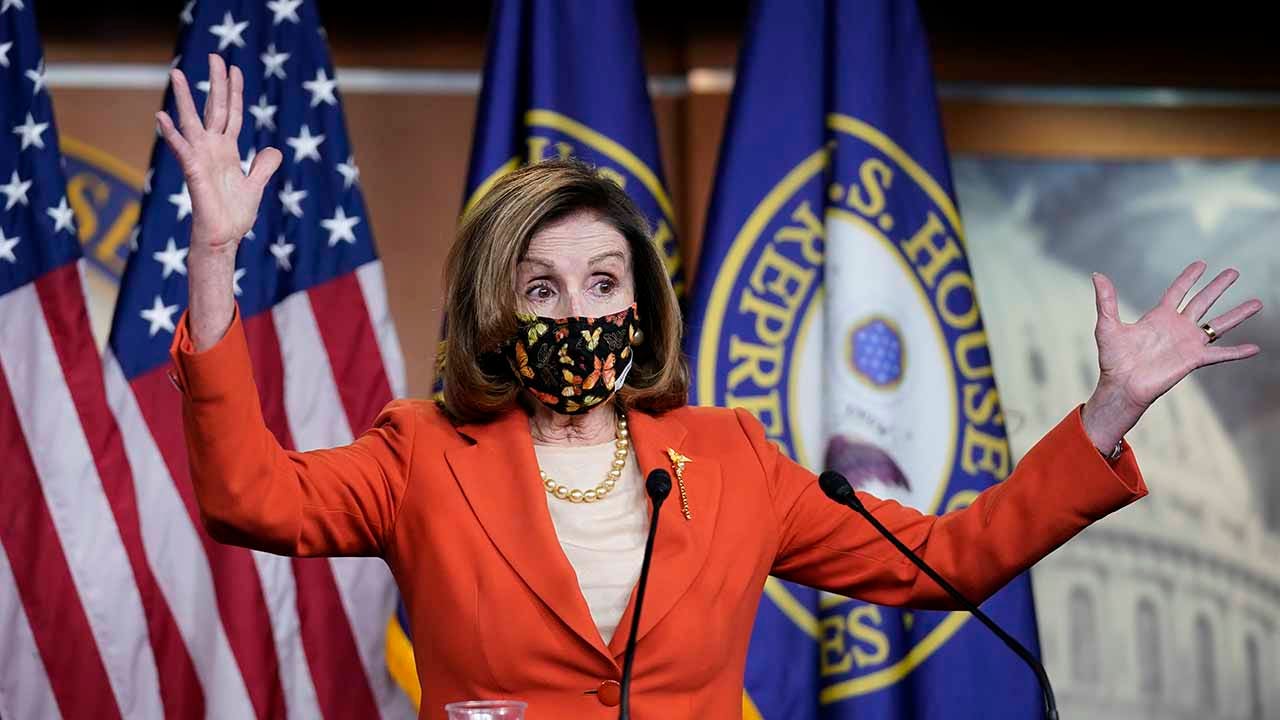 Republicans on the House Administration Committee are calling on Speaker Nancy Pelosi, D-Calif., to pay the fine for not going through metal detectors to get onto the House floor after her office confirmed that she hadn’t used them to access the floor in February.

Reps. Rodney Davis, R-Ill., Barry Loudermilk, R-Ga., and Bryan Steil, R-Wis., sent a letter to acting House Sergeant-at-Arms Timothy Blodgett requesting he levy fines against the speaker for not following the security protocols all members are required to follow to get to the House floor.

The lawmakers pointed out that metal detectors, or “magnetometers,” were placed at “three entry points” to the House chambers while others were changed to be exit only. They said C-SPAN footage and the speaker’s office confirmed Pelosi had used a “closed entrance” to enter the House chambers from the Speaker’s Lobby.

The group also said that, for a “significant period of time,” there were no metal detectors “at any entrance of the Speaker’s Lobby, which meant no Member was permitted to use those entrances to the House chamber.”

“However, the Speaker of the House has recently confirmed that she entered the House Chamber through a closed entrance on multiple occasions without completing a magnetometer security screening,” the lawmakers wrote. “Without evidence, she says that she was ‘wanded,’ and that this activity satisfied the ‘security screening’ requirement of Resolution 73.”

“By her own admission,” the lawmakers said Pelosi had been “afforded special treatment” when she avoided taking a stroll through the metal detector and was “wanded” instead.

The group declared that all members of Congress serving in the House “must live under the same rules.”

“If ‘wanding’ meets the requirements of Resolution 73, I request that you immediately afford similar treatment to all Members of Congress,” the group wrote.

“However, if the Speaker’s special treatment does not comply with Resolution 73, I ask that you immediately direct the Capitol Police to issue an incident report for each of her violations and impose the appropriate fines,” the group added.

Davis told Fox News in a Monday statement that he had “personally witnessed” Pelosi going around the House security procedures that she instated while pointing to his initial letter to Blodgett about the issue from February.

“I saw the video of Speaker Pelosi avoiding her own security screening procedures from Feb 4. I personally witnessed her doing so that morning. The video proves what our letter said back in February,” the House Administration Committee ranking member said. “It’s disappointing she has failed to hold herself to the same standards as others.”

“This type of behavior puts our brave men and women of the Capitol Police under even further stress,” he continued. “Speaker Pelosi continues to remind the American people that the rules are for everyone else but her, including members like Whip Clyburn, Hal Rogers, Louie Gohmert, and Andrew Clyde who have been fined at least $5,000 each.”

Loudermilk laid into Pelosi in a statement to Fox News on Monday, saying the GOP was done with the speaker’s “double standards” and calling on Pelosi to “pay the fine.”

“Me and my Republican colleagues on the Committee on House Administration, which oversees the Capitol Complex and Capitol Police, have been trying to shed light and hold Speaker Nancy Pelosi accountable for breaking the very rules she’s imposed on every other House member,” he said. “This video provides the American people a glimpse into Nancy Pelosi’s ‘do as I say, not as I do’ mantra. Republicans have had enough of Speaker Pelosi’s double standards, lack of accountability, and complete disregard for the rules of this institution. She needs to admit she broke her own the rules, and pay the fine.”

Steil blasted the speaker for not following her own rules and decried the metal detector policy as Pelosi’s “latest abuse of power” in a Monday statement to Fox News.

“Magnetometers for thee, but not for me is Speaker Pelosi’s latest abuse of power. She created a bad rule by requiring members to walk through magnetometers before voting on her liberal agenda,” Steil said.

“Now she refuses to follow her own rule. Why am I not shocked,” the Wisconsin Republican added. “She should pay the fine and then end the rule once and for all.”

Pelosi’s spokesperson Drew Hammill told Politico on Friday the speaker had been “wanded” to enter the House chamber through an entrance by the Speaker’s Lobby — which had not yet been equipped with magnetometers — rather than go through the metal detectors that the other members went through.

In a statement to Fox News on Monday, Hammill said “the rules change specifies screening but does not specify the device.”

“Wanding is more intrusive than passing through a magnetometer, I think anybody knows that if you’ve gone through an airport in the last fifty years,” Hammill said, saying Republicans are “grasping at straws” by calling for Pelosi to pay a fine for not using a metal detector.

“The rule only specifies screening. If you pass through the magnetometer right now and you go off, you are then screened with a wand. This whole thing is nonsensical,” he said, adding that members are being fined when “they blow through any screening and refuse to be wanted.”

“So she inherently is going through a more intrusive screening process than she would be if she just passed through a magnetometer,” Hammill said.

The House recently fined Majority Whip Jim Clyburn, D-S.C., $5,000 for not complying with the chamber’s mandate that all people must use metal detectors to enter the chambers.

According to Politico, Clyburn was fined for not using the metal detector when returning to the House chamber from the restroom. If he were to incur another violation, Clyburn would owe the House another $5,000.