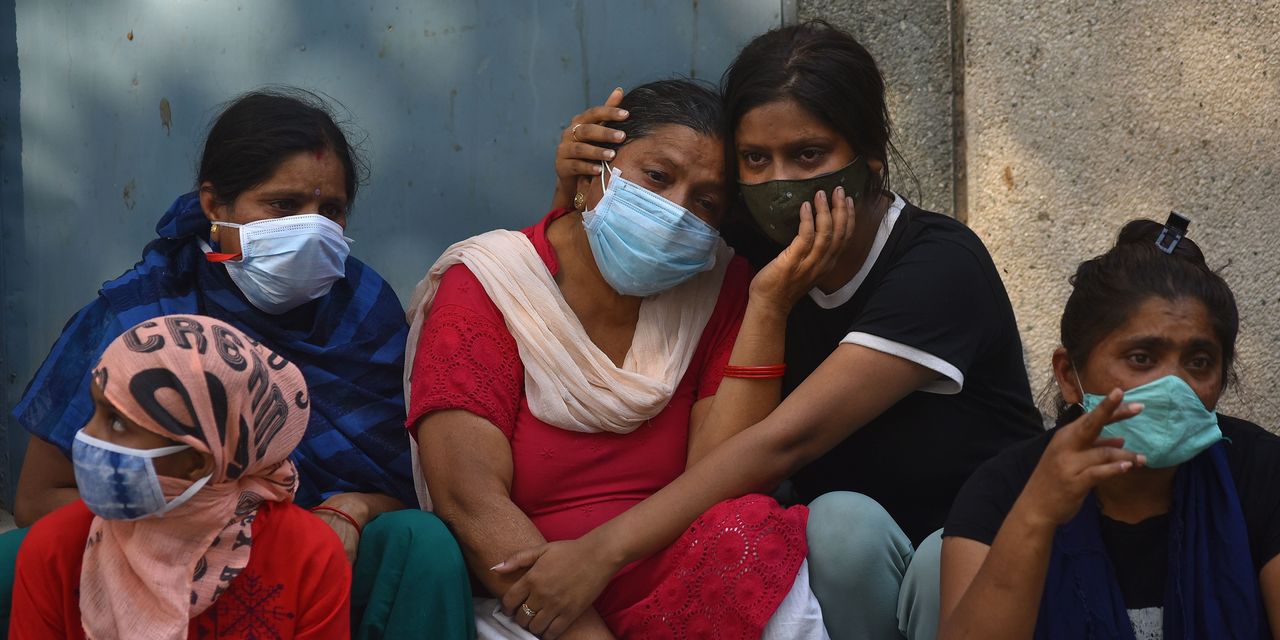 The explosion of Covid-19 cases in India and other developing nations is adding momentum to a push to suspend intellectual-property restrictions on vaccines, putting pressure on Washington, other Western governments and pharmaceutical companies to do more to address the crisis.

Some 60 developing countries, led by India and South Africa, are drafting a new proposal to waive the World Trade Organization’s intellectual-property rules—something they say would allow a significant increase in vaccine production world-wide. The new proposal will be put to the organization in the next few days, diplomats say.

Even as some 30% of Americans are fully vaccinated, less than 2% of Indians are. New Covid-19 cases are at record highs globally, largely due to an escalation in poor and middle-income countries such as Brazil, Turkey and Colombia.

Pharmaceutical companies, which are quickly scaling up production to meet global demand, say waiving the intellectual property on the vaccines wouldn’t solve supply problems in the short term because contract producers lack familiarity with new technology behind the shots—technical know-how that isn’t shielded by patents.

But pressure is building on Western governments, including the U.S. In a call earlier this week, Indian Prime Minister

“We have to evaluate whether it’s more effective to manufacture here and provide supply to the world, or the IP waiver is an option,” White House press secretary

said this week. She added that Mr. Biden hasn’t yet made a decision on whether the U.S. will support the waiver or push for other means to speed up immunization in developing countries.

More than 100 members of Congress support a waiver. A recent letter to Mr. Biden from

and nine Democratic senators, including Elizabeth Warren, said that “delaying vaccine deployment in the developing world to lock in profit-boosting patent protections threatens the safety of the American public that financed the vaccines in the first place.”

The WTO rules, known as Trips, were amended to allow for countries to manufacture a medicine in an emergency, after India and South Africa led an effort to lift patents for AIDS medication in the 1990s, which according to the United Nations saved tens of millions of lives in poorer nations.

Even after the reform in the years after the AIDS crisis, the process is cumbersome, open to legal challenges and could take years to implement because every vaccine is based on a large number of separate patents. It is also aimed at localized disease outbreaks, not a pandemic, so exporting medicines around the world under this current exemption is difficult.

The World Health Organization has established a special technology-transfer pool for Covid-19 vaccines, but so far no manufacturer has contributed to it.

“The market once again has failed in meeting the health needs of developing countries,” said U.S. Trade Representative

at a WTO conference on vaccine equity in April. “Extraordinary times require extraordinary leadership…This challenge applies equally to the industry.”

A number of large pharmaceutical companies, including Covid-19 vaccine developers

wrote to Mr. Biden in March, urging him to oppose the waiver. They stated that Covid-19 manufacturers can produce a combined 10 billion doses of the vaccine this year under the existing intellectual-property system. Campaigners for the waiver, however, say that far less is likely to be produced this year.

Drug companies say the obstacles to scaling up production include the need to train technicians, source scarce ingredients and ensure quality checks. They say there is a limited number of manufacturers capable of large-scale vaccine production.

They also say that there are manufacturing techniques, and biological components such as cells for some vaccines, that need to be passed on to set up new assembly lines. Under licensing agreements, such technology has been passed on to other manufacturers to produce Covid-19 vaccines, but critics say that not enough of these deals have been done and that the agreements are opaque.

Last year, the University of Oxford was exploring opening up intellectual property related to its then-exploratory Covid-19 vaccine and other pandemic-related science and technology to expedite the development of no-profit or low-profit shots. But the need for a partner with extensive experience in clinical trials, regulatory approvals and manufacturing to launch a vaccine led Oxford to seal an exclusive arrangement with AstraZeneca.

AstraZeneca has since built a web of more than 20 manufacturing partners, including the Serum Institute of India, with ambitious plans to help deliver vaccines to lower- and middle-income countries through Covax, a WHO-supported facility.

The enormous surge of infections in India, however, prompted New Delhi to halt Covid-19 vaccine exports. Covax has shipped just 50 million doses around the world, out of a goal of two billion by the end of the year.

Ugur Sahin, CEO of BioNTech SE, which makes a vaccine with Pfizer Inc., said this week his company could issue special licenses to other manufacturers, but dismissed calls to waive the intellectual property, saying it would take a year to master the technology and ensure quality control. Last year, it took a monthslong transfer of the messenger RNA technology for Pfizer to be able to produce the vaccine at scale because the technology is so new.

“We don’t want to have a low-quality vaccine in Africa,” Dr. Sahin said.

According to a July 2020 report by McKinsey, it normally takes 18 to 30 months for a contract manufacturer to adapt the technology needed to make vaccines. But, the report says, that can be compressed to as little as six months.

Backers of the waiver proposal say there are more than a dozen drugmakers in developing countries that have passed quality checks by the WHO and the U.S. Food & Drug Administration and that could be equipped to produce the shots. That would require a transfer of the technical know-how from vaccine makers and funding from institutions such as the World Bank.

While India and South Africa first called for lifting patent restrictions last October, the developing nations’ new pitch at the WTO will have tighter language limiting the scope and duration of the measures, in an effort to make it more acceptable to the U.S. and other rich countries, diplomats say.

What support can or should the world community lend to countries like India in the battle against the coronavirus? Join the conversation below.

Pharmaceutical companies in countries such as India, Bangladesh, South Africa and Senegal say they have the capacity to produce vaccines within a few months if Western manufacturers license or share their technology. Chinese and Russian Covid-19 vaccine manufacturers, meanwhile, are already pursuing licensing agreements in nations that include Brazil, Serbia and India.

Bangladesh’s Incepta Pharmaceuticals Ltd., for example, says it has a production line that could make 350 million doses a year of protein sub-unit vaccines, such as that developed by Novavax Inc. Among the vaccines Incepta, which has 10,000 employees, already makes are shots against cholera and hepatitis B. The company also says it has a “fill-and-finish” facility that could transfer another 500 million doses from bulk containers to final-use vials, saying that it could easily do this for mRNA vaccines.

“We have a tremendous facility here lying idle. It is very frustrating,” said the company’s chairman, Abdul Muktadir, who dismissed safety concerns as “pure nonsense.”

Mr. Muktadir said he was ready to pay to use the intellectual property rights, but that his offer of a licensing deal received no response from U.S. manufacturers.

In Canada, where there is a shortage of vaccines, Ontario-based Biolyse Pharma has spent months trying to get a license, but received no offers, according to spokesman John Fulton. Its plant, capable of making 50 million doses a year, stands unused.

Pfizer-BioNTech and Moderna haven’t licensed their Covid-19 vaccines to any producers in the developing world so far.

BioNTech’s Mr. Sahin said this week that his company was contemplating potential production in South America and Africa, but offered no details.

A spokesman for Moderna said that actively sharing the know-how with manufacturers in the developing world would have pulled resources away from its own efforts to produce hundreds of millions of doses during the pandemic. He declined to say whether Moderna opposed the Trips waiver proposal.

Johnson & Johnson has struck a deal with India’s Biological E. Ltd. to produce its shots, while a plant in South Africa has been contracted to fill the vaccine into vials.

—Jenny Strasburg and Bojan Pancevski contributed to this article.

Inmate who smuggled gun in her vagina sentenced to 10 years...