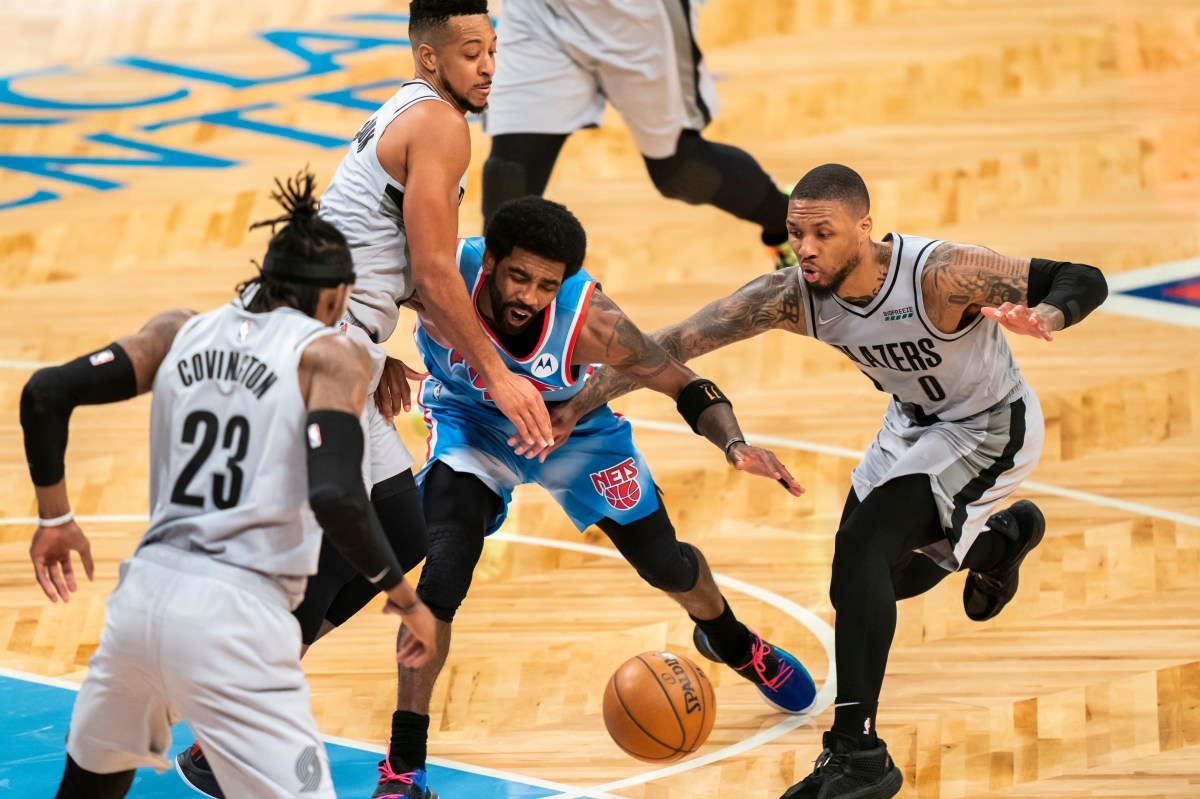 In a matchup between Kyrie Irving and Damian Lillard — two of the NBA’s best point guards — Lillard had more help and more health on his side.

The shorthanded Nets didn’t have enough firepower on one end or defense on the other. And in the end, they took a 128-109 loss to the Trail Blazers on the chin before 1,773 fans at Barclays Center.

“[They’re] an incredible test for us,” coach Steve Nash had warned beforehand. “This team can really score. They get up top five in 3s taken and efficiency. They cause all sorts of problems offensively. So for us, [a] little shorthanded, it’s a great test how we can come together.

“We’ve done a good job of that all year. And this will be a really big test for us on a back-to-back, getting in late or early this morning, and seeing how focused, how professional we can be tonight with maybe a little bit of tired legs, but hopefully a spark and a sense of focus to the game plan.”

This was a test the Nets failed miserably.

With the game up for grabs — the Blazers up just a single point late in the third quarter — the Nets couldn’t grab it. They witnessed an 18-4 Portland run and never challenged again.

Lillard finished with a game-high 32 points, including 11 in the game-deciding run. Center Jusuf Nurkic (23 points, 11 rebounds) punished the undersized Nets early, and Lillard took over to finish them off late.

Irving had a team-high 28 points, but with the Nets missing Kevin Durant and James Harden, they had little chance to rally on this tail end of a back-to-back.

“They’re different in the way they attack. Dame has become such a dominant 3-point shooter with incredible range, and Ky has just become a lethal one-on-one scorer at all three levels. So it’s a fascinating matchup and definitely focal points for both teams’ defenses.”

The Nets (43-21) saw their lead atop the Eastern Conference cut to just half-game after the second-place 76ers drilled the Hawks. And now, the Nets face the daunting prospect of playing at third-place Milwaukee on Sunday and again on Tuesday.

Harden, Nicolas Claxton, Chris Chiozza and Spencer Dinwiddie are all out long-term. Durant (left hamstring) and Bruce Brown (right knee soreness) could both return during the Bucks series.

They were all missed Friday.

Jeff Green finished with 16 for the Nets, and Mike James added 15.

Despite knocking on the door time and again, the Nets couldn’t take the lead. Down 72-66, a 9-4 run pulled them within a point on an Irving pullup with 5:11 left in the third. But the Nets allowed the next seven unanswered points to fall back behind by eight.

Brooklyn couldn’t stem the tide, and Portland extended the run to 18-4. The Nets went ice-cold, shooting just 1-of-9 in the five-minute stretch, while the Blazers hit 7-of-10 — including 4-of-6 from behind the arc.

Lillard sandwiched a 32-foot rainbow and an even more impressive 33-foot jaw-dropper around a Robert Covington 3-pointer. Lillard’s latter shot from the logo put Portland ahead 94-79 with 58.7 seconds left in the third.

The Nets never got closer than 99-91 the rest of the evening and fell back behind by 17 as Portland opened it up down the stretch.

Aaron Judge gets key hit after being ‘terrible at the plate’

Apple and Epic wrap up first week of their blockbuster trial. Here’s what happened and what’s next