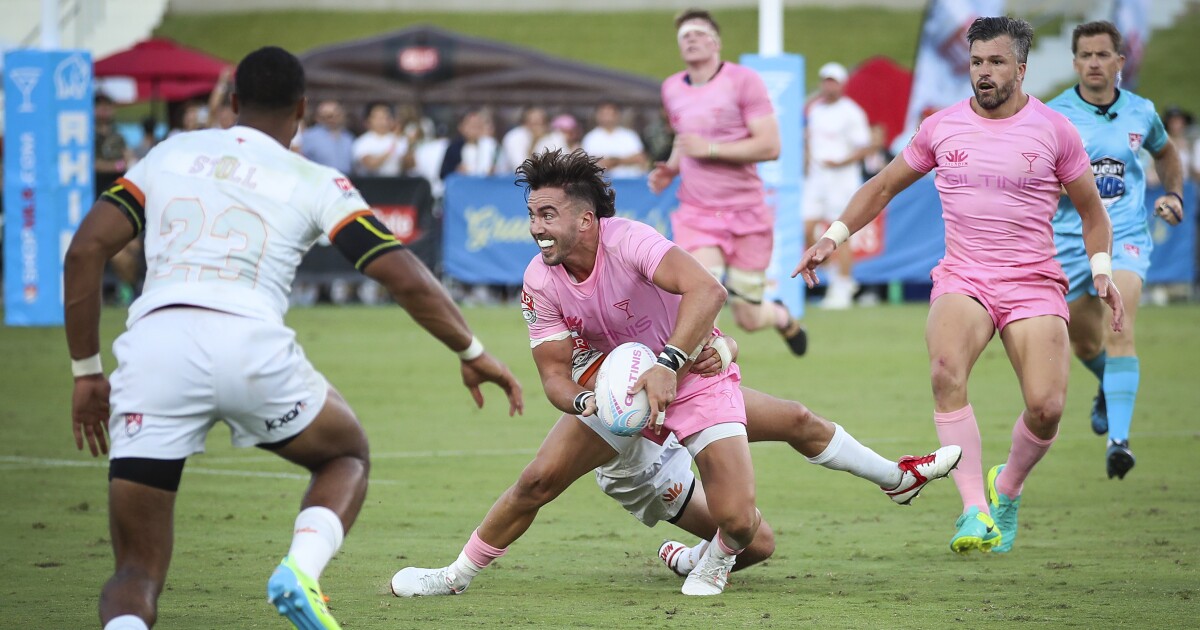 While the three-martini lunch may conjure images of Don Draper and Roger Sterling, these mad men — no pads, no helmets, named after a cocktail — are either passing a swollen oblong ball sideways and backward, or running or kicking it down the field in an attempt to push it across the goal line for a five-point try in a sport that evolved from soccer and is the predecessor to American football.

The Giltinis — the team that uses a martini glass as its logo — are Los Angeles’ latest professional sports organization. In May 2020, Major League Rugby, itself only four years old, announced that L.A. had been awarded a professional rugby union franchise. A little over a year later, the expansion Giltinis have reason to raise a glass. At 12-4, they have the league’s best record entering this weekend’s start to the postseason.

They enter the four-team MLR postseason as the Western Conference’s top seed and host the Utah Warriors, who beat the Giltinis in their regular-season finale two weeks ago. The winner of that match will face the winner of Saturday’s Eastern Conference finals between Rugby ATL Rugby and Rugby United New York.

The Giltinis’ home field is the venerable Coliseum, but a May appearance at SoFi Stadium spoke to both the possibilities for the franchise and the league, which was shut down last season because of the COVID-19 pandemic. Playing in front of the newly opened building’s first sports crowd, the announced attendance of 4,480 was a socially distanced sellout and the largest-attended match in the MLR this season.

Giltinis coach Darren Coleman attributed the club’s immediate success to team bonding at a preseason training camp in Maui, followed by another camp in Oxnard; a roster of quality international players, capable staff, good facilities and a “very supportive owner.”

Adam Gilchrist, the team owner, is an Australian entrepreneur who built his wealth in the fitness industry, then launched the rugby franchise through his sports company, Loyals Rugby. Gilchrist also owns a second MLR franchise, the Austin Gilgronis — a play on his name and the negroni, an Italian aperitif that is stirred, not shaken. (The Giltini Group has also applied for trademarks of Gil Tai, Gilacolada, Giljito, Gil-garita and Gilmopolitan.)

Alana Gattinger, the director of business operations for the Giltinis, said the team is committed to recruiting the best players in the world to bring attention to the game. One of those players is 38-year-old Matt Giteau, the David Beckham of rugby and Australia’s three-time World Cup star, who signed a one-year deal in the offseason. Giteau leads the league with 32 conversions, defined as a kick through the goal posts following a try and worth two additional points.

Another is DTH van der Merwe. The 35-year-old outside back is tied with San Diego Legion’s Bjorn Basson for the league lead with 10 tries. A try, akin to football’s touchdown, is worth five points. It’s the primary method of scoring by placing the ball across the goal line. The South African moved to Canada when he was 17 and is Canada’s all-time top scorer. He has played in four rugby World Cups and in Europe for 11 years.

Much of the Giltinis’ appeal, however, has been their commitment to recruiting homegrown talent. Utility back Christian Rodriguez, who grew up in Hawaiian Gardens and still resides there, brings his own cheering section of about 30 family and friends to each home game. Rodriguez was introduced to rugby as a 13-year-old through an at-risk youth program called Alternatives to Gang Membership and now is a volunteer coach for the program. The Giltinis hosted about 30 members of the Hawaiian Gardens Youth Rugby team for the game at Sofi.

“You think that opportunity is only going to be available to football players, so it was unbelievable to play in Sofi,” Rodriguez said. “After playing there, it’s still unbelievable.”

“It’s a skillful, beautiful game. Time for America to wake up and get more involved.”

Ryan James grew up on the Marine Corps Air Station Miramar base and attended Cathedral Catholic in San Diego, where he played football and club rugby. James, 21, was introduced to rugby by his mom, a New Zealander who grew up playing the sport.

“I’m loving it,” said James, who plays wing and fullback. “I’m close to home.” While James said a lot of similarities exist between football and rugby, one of the biggest differences is the social aspect among the opposing players. After mixing it up on the field, both teams clink beers and break bread together.

The MLR has 12 members divided between the Western and Eastern conferences. Eleven of the teams are based in the U.S., the 12th from Canada, the Toronto Arrows. The two-time defending MLR champion Seattle Seawolves, Austin Gilgronis, Houston Sabercats, San Diego Legion and Utah Warriors compete in the Western Conference with the Giltinis. The New England Freejacks, Nola Gold, Old Glory DC, Rugby ATL, Rugby United New York and Toronto make up the Eastern Conference.

This is not the first attempt at a pro rugby league in the U.S. There have been several incarnations over the years that never got off the ground. The one that did was the Professional Rugby Organization, known as PRO Rugby. It began play in April 2016 with five teams and ceased operations by January 2017.

Gattinger said the business model for MLR is more sustainable than that of PRO Rugby, mainly because it has a board of owners and a governing body led by Commissioner George Killebrew, a former Dallas Mavericks executive vice president and chief revenue officer under Mark Cuban.

And while L.A. is a bustling sports scene, Killebrew noted that MLR teams are now in seven of the 10 largest markets in the U.S., most of which are crowded with sports teams. “You have to find your own niche, and find your own way,” he said. Killebrew said before COVID, which shut down the MLR after Week 5 last season, the league was tracking at a 25% growth in attendance.

“All of our indicators [attendance, sponsorships, TV ratings] were all on the rise going into Year 3.” Their best draws prior to last season, Killebrew said, were San Diego, Utah and Seattle.

With the country opening up, MLR experienced a 44% uptick in June, with 39,000 attending matches compared with the season’s first month, May, which drew roughly 27,000 fans. Through 75 matches, the average attendance is 1,485 per match.

As for the fans, some are expats, others are former or current rugby players, and still others are curious newcomers. Approximately two-thirds of the MLR fanbase is male. Just under 40% are between the ages of 18-34, 33% between 35-54 and 28% are 55-plus.

“We’ve had a lot of new people come along and have fallen in love with it,” said Coleman, who recently announced he is stepping down at the end of the season to accept a coaching opportunity with the New South Wales Waratahs, based in his native Australia. “It’s a skillful, beautiful game. Time for America to wake up and get more involved.”

New Giltinis fans Richard Powell, 37, and Mark Didomenico, 33, of Simi Valley, both took up rugby in their 30s and currently play with the Ventura County Outlaws, a club team. As soon as it was announced that L.A. was awarded a team, they bought in. Their first in-person Giltinis game was at SoFi.

“The team is amazing,” said Powell. “They exemplify what is amazing about the game of rugby. It’s the most honest sport there is. It’s also one of the most brutal games.”

Powell isn’t wrong. According to a study conducted by Complete Concussion Management in 2018, men’s rugby has the highest rate of concussion for those over 18, with a rate of 3.0 concussions per every 1,000 players per game. Football is second, with 2.5.

Nonetheless, the fans are coming out. Didomenico noted, too, that it’s easy to build a fan base when the team you’re cheering is winning. “These guys are really good,” he said. “An easy way to gain fans is to win.”