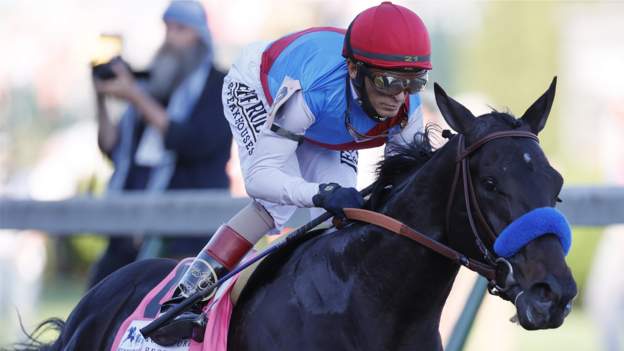 Medina Spirit won the Kentucky Derby to give trainer Bob Baffert a record seventh victory in the race.

Jockey John Velazquez led Medina Spirit from the front and held off three challengers on the home straight to claim his fourth Derby win.

It was Velazquez and Baffert’s second consecutive win together after Authentic won the delayed 2020 edition in September.

“This little horse, that’s him – he was all guts.”

American Baffert was unable to enter Life is Good, who likely would have been the race favourite, because of an injury sustained last month.

“When I saw him on an easy lead, I kept waiting for these horses to come at him, but Johnny had him in the perfect spot,” said 68-year-old Baffert.

“I’m the luckiest guy in the world. The record hasn’t sunk in yet. I’m so thrilled. You just never know if you are ever going to be back – it’s so difficult.”

Baffert surpasses the record of Ben Jones, who won the Derby six times between 1938 and 1952.

Puerto Rican Velazquez, 49, is now one win off the record of five victories shared by Eddie Arcaro and Bill Hartack.

“What an incredible feeling – this doesn’t get old,” Velazquez said.

“I said to Bob, ‘we’re going to put him on the lead and see what happens and I think he’s the horse to beat’. It worked out.”

The 147th edition of the Derby took place in front of a socially distanced crowd of 51,838 at Churchill Downs, reduced from the usual capacity of 150,000.

Last year’s race took place behind closed doors and was moved to September because of the Covid-19 pandemic.