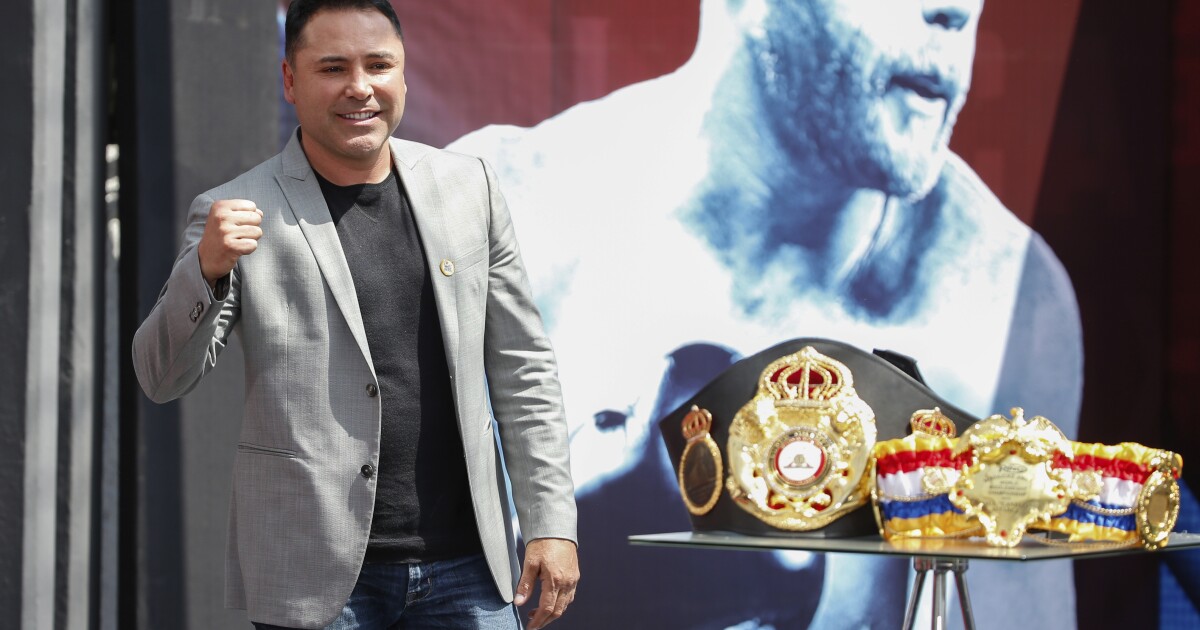 Oscar De La Hoya’s comeback fight at the age of 48 against former UFC champion Vitor Belfort officially has a home, and it will take place in the Los Angeles born-and-bred boxer’s backyard at Staples Center on Sept. 11.

Triller announced the news Wednesday, noting the bout will be a professional boxing match and not as an exhibition in Las Vegas as was originally planned. The fight will unfold during a maximum of eight rounds at two minutes each at the light heavyweight limit.

A news conference is scheduled for July 27 in Los Angeles to formally announce the fight between the Hall of Fame fighter and six-division champion De La Hoya (39-6, 30 KOs) and two-division MMA titlist Belfort (26-14, 18 KOs). The California State Athletic Commission will sanction the professional bout once both fighters pass comprehensive medical testing.

“I’m very excited to announce my comeback … in a mega-event celebrating Mexican Independence Day,” De La Hoya said in a news release. “I decided if I was coming back, it was for real, none of this exhibition stuff. Two warriors, one walks out and the other doesn’t. Vitor Belfort is clearly a very tough MMA legend and while I’m sure he will give me a good run, a knockout is in my plan.”

De La Hoya has been documenting his training in detail on social media in recent weeks. He’s transformed the backyard of his Pasadena home into an outdoor gym replete with a ring and heavy bags.

The Mexican-American great credited his comeback to Mike Tyson after the heavyweight icon competed in an exhibition last year versus Roy Jones Jr. at Staples Center. De La Hoya said Tyson motivated and helped reinvigorate him to try his hand at a comeback fight.

“This isn’t that WWE theatrics we’ve been seeing in boxing lately, this is the real deal, a real fight with real knockouts for a real win,” said De La Hoya, alluding to the recent influx of boxing exhibitions that have taken place after the Tyson fight. “This is not to be missed as I’m in better shape than I was 15 years ago.”

De La Hoya is a 1992 United States Olympic gold medalist who has not fought since quitting on his stool in 2008 during a one-sided beating to Manny Pacquiao.

He ended his career with a 3-4 record in his last seven fights after a remarkable run with wins over the likes of Julio César Chávez (twice), Pernell Whitaker, Fernando Vargas, Hector Camacho, Arturo Gatti and Ricardo Mayorga.

De La Hoya has kept a foothold in boxing during retirement as the founder and CEO of Golden Boy Promotions.

The 44-year-old Brazilian brawler Belfort has not fought since 2018, a knockout loss to Lyoto Machida. Belfort has fought only once as a professional boxer during his career, a first-round knockout win in 2006 in Brazil.

The UFC star Belfort has only one win, three losses and one no contest since 2016. He is a former UFC 12 heavyweight tournament champion and a light heavyweight champion who has scored wins in his career over the likes of Randy Couture, Anthony Johnson, Michael Bisping, Luke Rockhold and Dan Henderson.

“While we both have a great deal of respect for each other’s accomplishments, on Sept. 11, I will make my MMA fans proud to show that MMA and ex-UFC fighters can take down even the best boxer in the world,” Belfort said of De La Hoya in a news release. “I hope I don’t end up killing him, but everything is on the table. This is a no holds barred, all out gladiator fight to the bitter end.”

It was the East Los Angeles native’s only fight in the arena, but enough for the home-grown talent to be honored with a bronze statue outside the stadium in the area billed as Star Plaza.

Psaki continues beef with DeSantis, GOP governors, says ‘get out of the way’ of mask mandates