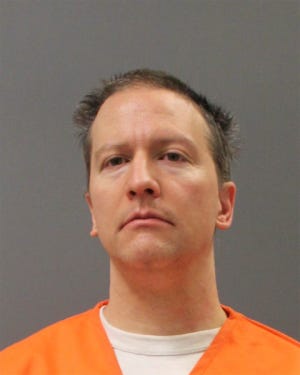 Minnesota’s attorney general filed paperwork Friday asking that Derek Chauvin be given a more severe prison sentence in the killing of George Floyd, arguing that the former Minneapolis police officer inflicted torturous deadly methods as Floyd pleaded for his life.

Chauvin, who is scheduled to be sentenced in June for second-degree murder and other charges, abused his power as a police officer in full view of the public and while Floyd was handcuffed and crying out for his mother, state Attorney General Keith Ellison said in a legal brief filed in Minnesota’s Hennepin County District Court.

Prosecutors also wrote that Chauvin’s actions “inflicted gratuitous pain” and psychological distress not just on Floyd, but the civilian bystanders who they argued will be haunted by the memory of what they saw.

Four of the people in the crowd watching Floyd die were minors, the court filing said.

“Defendant thus did not just inflict physical pain. He caused Mr. Floyd psychological distress during the final moments of his life, leaving Mr. Floyd helpless as he squeezed the last vestiges of life out of Mr. Floyd’s body,” the filing says.

Defense attorney Eric Nelson is opposing a tougher sentence, saying the state has failed to prove that those aggravating factors, among others, existed when Chauvin arrested Floyd on May 25.

Nelson also said Floyd was not treated with particular cruelty, saying that there is no evidence that the assault perpetrated by Chauvin involved gratuitous pain that’s not usually associated with second-degree murder.

“The assault of Mr. Floyd occurred in the course of a very short time, involved no threats or taunting, such as putting a gun to his head and pulling the trigger … and ended when EMS finally responded to officers’ calls,” Nelson wrote.

Chauvin, who is white, was convicted last week of second-degree unintentional murder, third-degree murder and second-degree manslaughter for pressing his knee against Floyd’s neck for 91/2 minutes as the Black man said he couldn’t breathe and went motionless.

Even though he was found guilty of three counts, under Minnesota statutes he’ll only be sentenced on the most serious one – second-degree murder. While that count carries a maximum sentence of 40 years, experts say he won’t get that much.

Prosecutors did not specify how much time they would seek for Chauvin.

Under Minnesota sentencing guidelines, the presumptive sentence for second-degree unintentional murder for someone with no criminal record like Chauvin would be 12 and a half years. Judges can sentence someone to as little as 10 years and eight months or as much as 15 years and still be within the advisory guideline range. To go above that, Judge Peter Cahill would have to find that there were “aggravating factors,” and even if those are found, legal experts have said Chauvin would likely not face more than 30 years.

Prosecutors said Friday that an upward departure from the sentencing guidelines is warranted because there are multiple aggravating factors in the case.

States keep up with lawsuits against China for ‘malicious’ role in...