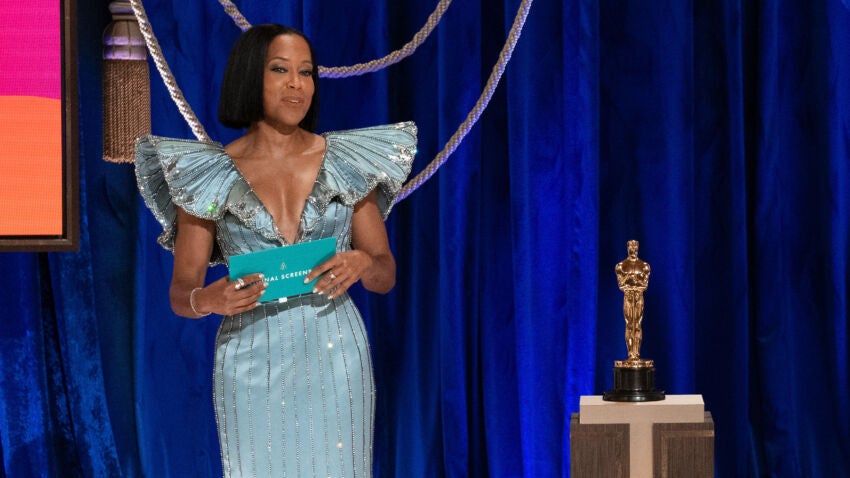 The 93rd Academy Awards started off on a distinctive note, both in style and in substance.

The show began with a walk-in intro from actress/director Regina King, with opening credits rolling by as she strolled into the ceremony reminiscent of a Hollywood blockbuster.

King’s entrance felt like something out of “Ocean’s 11,” which was fitting, as the film’s director Steven Soderbergh helped produce this year’s ceremony.

Once on the stage, King took a moment to address recent current events before launching into the awards presentations.

“It has been quite a year, and we are still smack dab in the middle of it,” King said. “We are mourning the loss of so many.”

King then referenced the conviction of Derek Chauvin in the killing of George Floyd, saying she might have “traded in her heels for marching boots” if things had gone differently in the trial.

“I know that a lot of you people at home want to reach for your remote when you feel like Hollywood is preaching to you,” King said. “But as a mother of a Black son, I know the fear so many live with, and no amount of fame or fortune changes that.”

The ceremony felt different than every Oscars in recent memory, taking place simultaneously in two locations: Union Station in Los Angeles and the Dolby Theatre at the Hollywood & Highland Center. At Union Station, the scene felt intimate, with cinema-quality lighting and a smaller crowd of nominees, all mask-less, seated gala-style.

Share
Facebook
Twitter
Pinterest
WhatsApp
Previous article3 takeaways after the Chicago Cubs lost 6-0 to the Milwaukee Brewers to drop 2 of 3 at Wrigley Field, including Nico Hoerner making a case to stick around
Next article‘West Side Story’: Watch the first trailer for Steven Spielberg’s adaptation of the beloved musical

Meet the man behind some of the best questions on Twitter