HomeSportsSeven things to know about Josiah Gray before he makes his Dodgers...
Sports 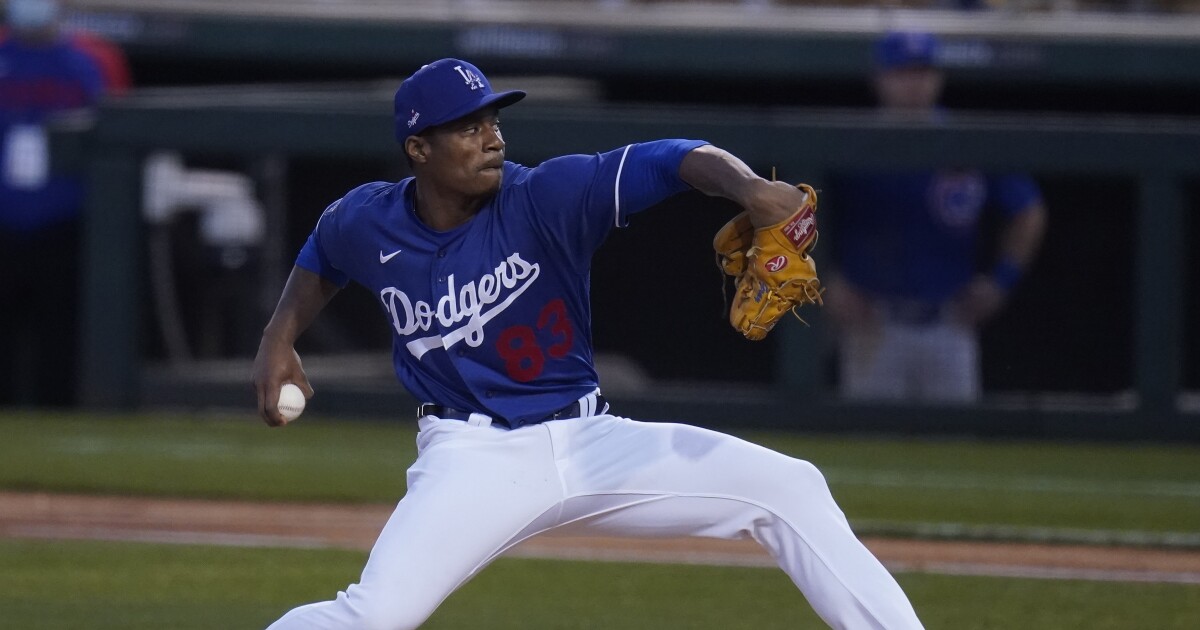 Josiah Gray is scheduled to make his major league debut Tuesday against the San Francisco Giants, likely entering the game after an opener pitches the first inning or two.

Here are seven things to know about the Dodgers’ top prospect:

Gray was recruited by only one college coming out of New Rochelle (N.Y.) High. Le Moyne, a Division II Jesuit school of about 3,000 students in Syracuse, brought Gray in as a two-way player, expecting him to play shortstop and serve as a closer.

As a sophomore, Gray filled the role Le Moyne coaches envisioned for him, starting all 44 games at shortstop and notching 10 saves while posting a 0.63 ERA. Opponents batted only .143 against him. He batted only .226 with occasional power, prompting him to focus solely on pitching as a junior.

Gray, who is 6-foot-1, filled out during the offseason ahead of his junior year, gaining 30 pounds to reach 205. His fastball was clocked in the mid-90s and Le Moyne games went from sleepy affairs to attracting scouts from every major league organization.

“He took the game dead serious the minute he walked on campus,” Le Moyne assistant coach Mike Meola said. “Then he got bigger, stronger, faster. By his junior year, he became a physical specimen.”

Gray earned a 3.79 grade-point average at Le Moyne to gain academic All-American honors. Most impressive to Meola? A management major, Gray posted a 4.0 GPA in the spring of his junior year even though he knew he’d be drafted and sign weeks after school ended.

“He was a good student when he came in, but that 4.0 was unbelievable,” Meola said. “Scouts were all over him and he wasn’t going to come back to school. A lot of kids would have been counting down the days.”

His college coach pitched in the big leagues

Scott Cassidy was signed by the Toronto Blue Jays out of Le Moyne in 2002 and pitched four years in the majors for Toronto, Boston and San Diego.

What advice did he have for Gray before he makes his debut?

“It’s funny, as you look back, you almost wish you enjoyed the moment a little more,” Cassidy said. “The kind of pitcher I was, I wasn’t a mainstay in the big leagues. So you pitch on edge a lot. You look over your shoulder a lot.

“So all I told him was to enjoy the moment. JoJo will be laser-focused on the mound. That’s a given. So I said to him, ‘When you get off the mound, take it in and enjoy it.’ ”

Gray’s father, Ron Cheavers, died of cancer a month after he was a second-round draft pick of the Cincinnati Reds. Cheavers suffered a long illness and wasn’t able to see Gray pitch often during his last season at Le Moyne.

Cheavers was a key figure in Gray’s development as a player and a person.

“Because my father invested so much time in me playing this game and trying to help me live out my dreams, I have to repay the favor and give it my all every fifth day,” he told Dodgers Insider after he was traded to the Dodgers after the 2018 season.

In his first season in the Dodgers organization, Gray experienced a rocket-like ascent Jeff Bezos, Richard Branson and Elon Musk would appreciate. He had stops at Great Lakes, Rancho Cucamonga and Tulsa, playing for three managers and three pitching coaches. Yet they were all on the same page, emphasizing that Gray establish his explosive four-seam fastball, which in turn made his secondary pitches more effective.

“Everyone is really all in for you, no matter if you’re a first-rounder or 40th-rounder,” Gray told The Times in 2019. “Everyone is trying to make you the best player you can be. Having that system makes guys want to come to the ballpark every day, really want to get better.”

Everybody calls him JoJo

“He’s the most humble, down to earth guy you’ll ever meet,” Cassidy said. “Everybody is friends with him. He’s driven and focused, and he’s a pleasurable kid to root for.”

Benches briefly clear after José Abreu is hit in the helmet with a pitch during the Chicago White Sox’s 6-4 win against the Cleveland...

Pokemon on Pebble? Pebblemon Brings a Clone of the Game to Your Smartwatch