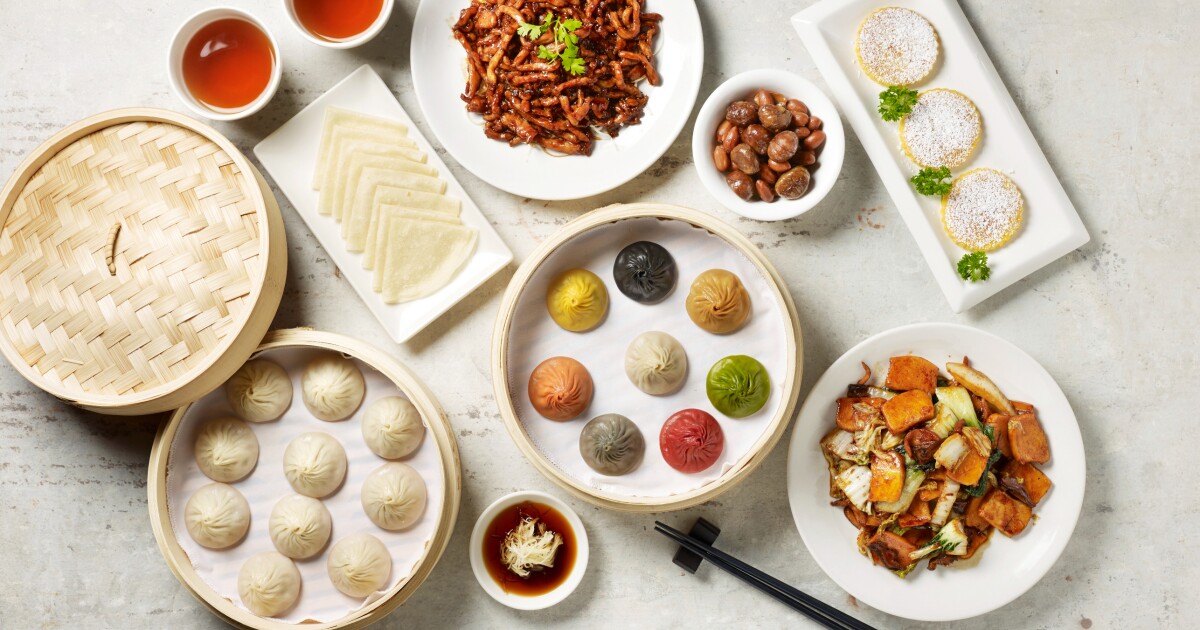 Paradise Dynasty, a Singaporean chain with 48 locations in nine countries, will debut in the U.S. on Aug. 16 at the former Charlie Palmer space inside Bloomingdale’s at South Coast Plaza in Costa Mesa. (The restaurant was originally scheduled to open in Spring 2020, but the pandemic delayed those plans.)
Paradise Dynasty’s menu will feature rainbow-hued Kurobuta pork soup dumplings with such flavors as foie gras and black truffle, and hand-pulled noodles with a spicy sesame and peanut dan dan sauce. The downstairs space will be occupied by Le Shrimp Ramen, the chain’s ramen concept featuring shrimp-and-pork bone broth and shrimp toppings such as prawn meatballs and dumplings.

Brothers Ted and Yong Kim have launched a pop-up called the Window @ Seoul Sausage on the border of Echo Park and Westlake. (The opening comes on the heels of a second-place finish on the Food Network’s “Great Food Truck Race: All Stars.”) The rotating menu currently features the most popular items from the competition, including kimchi pasta with shrimp and bulgogi cheeseburger eggrolls.

White Label Creamery, a shop on Fairfax Avenue that specializes in ice cream, sneakers, clothes and art collectibles, is celebrating its grand opening with a number of events. The store is run by Phong Ly Trinh, who has Pearl’s Finest Teas next door. The menu features his vegan ice cream, including honeydew, taro and Vietnamese coffee; dairy soft serve; and taiyaki-style cakes. Trinh is collaborating with graffiti artist Kaws by making desserts that look like his characters; Trinh fills custom waffle molds with batter and such flavors as Nutella, cheese and cream cheese. In mid-August, the store will have a tokidoki brand pop-up, with special character-shaped waffles, new flavors and merchandise.

Culver City’s Citizen Public Market, home to restaurants such as Jolly Oyster and chef Keith Corbin’s new Louella’s Cali Soul Kitchen, is hosting pop-ups and live events through September. The rooftop Bar Bohémien has launched a Summer Brunch Party series on Sundays, with live DJs. Chef Nancy Silverton, who also heads the food hall’s Pizzette, is doing a pop-up with gelato and sorbet, with flavors such as Spiced Stumptown Coffee and Whiskey Cake and Cream. There will also be rotating lineup of pop-ups from such vendors as Bang Bang noodles, Go-Go Gyoza and Go-Go Bird. The market will host special dog events every Saturday in August.

12 key recipes to up your grilling game