So good, so good! At SoFi Stadium, fans celebrate a real, live concert and a worthy cause 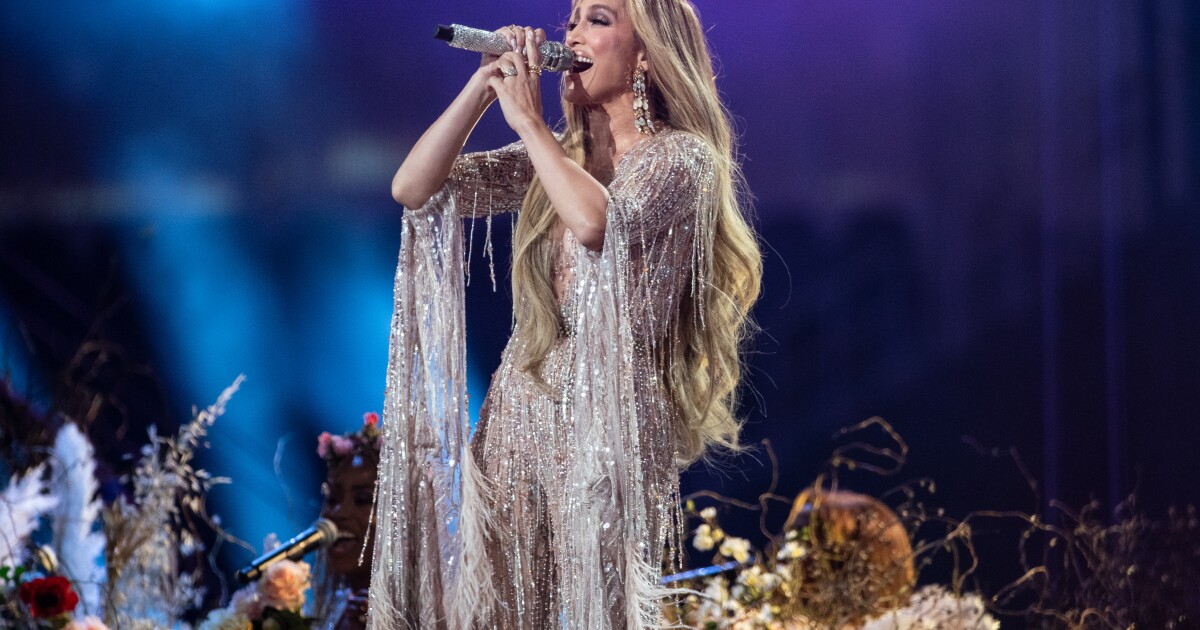 Dave Grohl had just led Foo Fighters through a pummeling rendition of “My Hero” when he looked out at the thousands of people — real, live people standing right there in front of him — who’d been singing along at the top of their lungs.

“Dude,” he said, grinning as he relished the moment. “I remember this.”

More than a year after COVID-19 essentially shut down the live-music business, Foo Fighters and a host of other acts stepped carefully but excitedly into the post-pandemic future Sunday night at Inglewood’s SoFi Stadium, where the international aid group Global Citizen presented “Vax Live: The Concert to Reunite the World.”

The grandly titled production, which also featured performances by Jennifer Lopez, J Balvin and Pearl Jam’s Eddie Vedder and live appearances by Prince Harry, Selena Gomez, David Letterman and Sean Penn, was meant to encourage people to get vaccinated and to urge leaders of rich countries to share resources with those in need; an edited version of the concert will be shown Saturday on ABC, CBS, Fox and YouTube.

But if “Vax Live” will ultimately reach its target audience through screens, Sunday’s taping, as Grohl happily pointed out, was the kind of large-scale, in-person event few if any musicians or fans have experienced since early 2020. More than one speaker onstage said the show was the first concert at SoFi, which opened in September only to host spectator-less NFL games by the Rams and the Chargers.

“Vax Live” wasn’t open to the general public; the audience consisted of maybe 20,000 invited healthcare and other essential workers, all of whom were asked to provide proof of full vaccination on their way in. Nor was the brand-new stadium, an aggressively modern behemoth Letterman described as a “spaceport,” totally up and running. Fancy-looking food stalls were closed and no alcohol was served; instead, workers wearing masks and gloves roamed the twisty-turny hallways handing out water bottles and apples individually wrapped in plastic.

Still, the welcome novelty of a live musical experience after months of glitchy livestreams wasn’t lost on anyone in the building.

“This night is the first taste of the life we’ve all been missing,” Penn said to much applause as he introduced his old pal Vedder, who struck an endearing note of disbelief between songs. “Holy f—,” he exclaimed. “There’s a microphone. There’s a crowd.”

Indeed, for performers getting back into fighting shape, this was probably as sympathetic an audience as they could find. People even cheered when SoFi’s enormous video screens showed a pre-taped performance by H.E.R., who sang the stomping “Glory” in the stadium’s parking lot surrounded by guitar students from L.A. public schools.

“This is fun, this is great, this is nice just to be out,” one showgoer, Yvette Kasper of Newbury Park, said with a hearty laugh.

Yet few on the bill took the opportunity to coast; the pent-up desire to play coursed through a ferocious take on Pearl Jam’s “Corduroy” by Vedder and his three-man backing band and through “Otra Noche Sin Ti” by Balvin, who staged the slick synth-pop love song as a kind of outer-space exploration complete with dancers and a giant replica of the moon.

Foo Fighters brought out AC/DC’s Brian Johnson to do that band’s deathless “Back in Black,” while Lopez reached for a more unexpected crowd-pleaser: Neil Diamond’s “Sweet Caroline,” for which she brought her mother to the stage after explaining that her mom sang the song to her as a lullaby when she was young.

Wearing a feathered-and-bedazzled pantsuit too fabulous for Zoom, Lopez dramatically extended her arms as she belted Diamond’s lyric about “touching hands” — glorious confirmation that cheap seats, and the showbiz theatrics geared to them, appear to be on the way back.

Among the luminaries using their celebrity to try to combat vaccine hesitancy and the uneven distribution of vaccines, Prince Harry was the most enthusiastically received; he was also the most forthright as he described vaccines as a “basic right for all” and warned against the misinformation and disinformation circulating online about them.

“I understand why people are confused or sometimes don’t know what to think or believe about vaccines,” he said. “We are experiencing a viral pandemic alongside a digital pandemic.”

Of course, Harry’s was a message intended less for the pro-vaccine crowd at SoFi than for those on the fence who might watch later on TV. A bit later, as Chrissie Teigen introduced Lopez, the model and author played directly to those in the house, and finally out of their own, when she dropped an F-bomb after flubbing her scripted lines.

Nobody begrudged her the time to try again.