HomeSportsUSWNT already in tough spot after losing to Sweden 3-0 in Olympic...
Sports 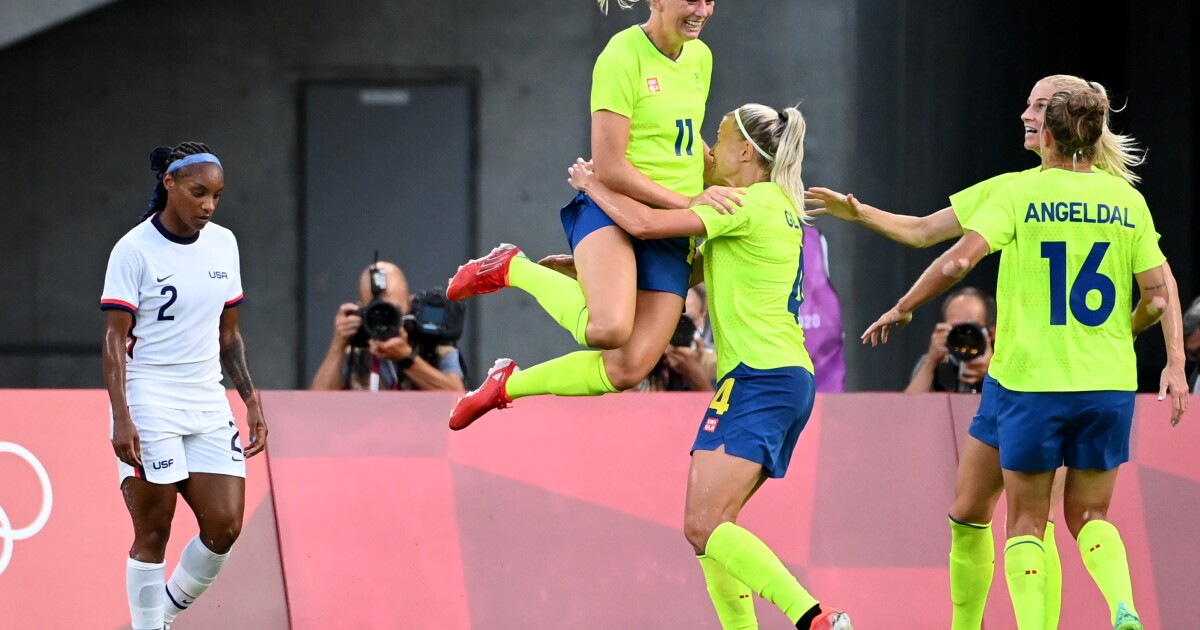 Vlatko Andonovski coached the women’s national soccer team for 21 months and 24 games before experiencing what he experienced Wednesday.

And not just any loss, because the 3-0 defeat to Sweden in the opening game of the Tokyo Olympics leaves the Americans with no room for error in its next two group-stage games with New Zealand and Australia.

“It’s not something we expected,” Andonovski said.

“Obviously, we put ourselves in a big hole. But we’re the only ones that can get ourselves out of it.”

“You drop points in the beginning of the tournament, now you’re in sort of do-or-die mode,” she said. “You’ve got to pick up points. Otherwise, we’re going home real quick.”

The U.S. went home from the 2016 Rio Games early after being eliminated by Sweden on penalty kicks in the quarterfinals, marking the first time the Americans failed to play in the gold-medal final. But even that loss wasn’t as shocking as Wednesday’s result, which ended a 15-game unbeaten streak in Olympic play and a 44-game unbeaten streak overall.

The three goals the U.S. gave up in 72 minutes were one fewer than it had given up in 24 games combined under Andonovski. And with the Americans failing to get a goal of their own for the first time in four years, Wednesday’s defeat was the worst since a 4-0 beating by Brazil in the semifinal of the 2007 Women’s World Cup.

That’s not the kind of history Andonovski hoped to make in his first international tournament as coach.

“I don’t remember the last time we gave up a goal,” Rapinoe said. “So, to give up three is not great. But it is what it is. Now we know exactly what we need to do. We need to win these games.”

They won’t do that playing like they did Wednesday, when they seemed to pass the ball to Sweden more often than they did to their own teammates, defended lazily and failed to finish a number of scoring chances in the second half.

But the result wasn’t the only thing unusual about the game.

There was no traffic around Tokyo Stadium, no fans milling about inside or outside the cavernous bowl. The player introductions were greeted with silence, not cheers. The national anthems played to 48,000 empty seats.

If there were any doubt that these pandemic-delayed Games would be different, it was dispelled in the first half against Sweden.

The players were audible from the second level as they shouted at one another. Goals and great saves were acknowledged by whatever applause the seven substitutes on each team’s bench could muster — and by Andrés Cantor, whose signature cry of gooooooolllllll could be heard as clearly in the stadium as it was on Telemundo.

It was an eerie tableau.

“You go to a major tournament, that’s one of the best parts, just the buzz that we get. We should be thankful that we even have a tournament, but, yeah, definitely changed the dynamic a lot.”

If Sweden, ranked fifth in the world by FIFA, was bothered by that, it didn’t show. Playing off the front foot from the start, the Swedes forced U.S. goalkeeper Alyssa Naeher into four sprawling saves in the opening 24 minutes before a well-marked Stina Blackstenius finally beat her, stepping in front of defender Abby Dahlkemper to nod home a perfect right-footed Sofia Jakobsson cross from the edge of the penalty area.

It was the first goal that the top-ranked U.S. had allowed in seven games and 592 minutes — or since the last time it played Sweden. But it wouldn’t be the last, with Blackstenius doubling the lead in the 54th minute, pouncing on a corner kick that had struck the far post and using her left foot to put it into the top netting.

The last time the U.S. allowed two goals in the same game was in Andonovski’s debut as coach, a time when the coronavirus was still months away from changing the sports landscape. And when second-half substitute Lina Hurtig added a goal in the 72nd minute, it marked the first time the U.S. had given up three goals since a 5-3 win over Australia in April 2019, three months before it won the Women’s World Cup.

The U.S. tested Swedish keeper Hedvig Lindahl five times, but the left goalpost stopped its two best chances, a Rose Lavelle header in the final minute of the first half and a close-range shot from Christen Press midway through the second half.

With the top two teams in each of the three groups, plus the two best third-place finishers, advancing to the quarterfinals, the U.S. has a clear road ahead if it wins its next two games. And the Americans have been here before, getting shut out by Norway in their Olympic opener in Beijing before rolling through the rest of the tournament unbeaten to win the gold medal.

But that was 13 years and four coaches ago. It won’t be as easy this time, not in a 12-team field that includes eight of the world’s top 10 teams and the four semifinalists from the last World Cup.

“We have a lot of work ahead of us,” Sauerbrunn said.

Share
Facebook
Twitter
Pinterest
WhatsApp
Previous articleOlympics 2021: More coverage than ever, no fans, and a lot of different ways to watch
Next articleColumn: U.S. men’s gymnasts have outside shot at medal in Tokyo Games