HomeSportsUSWNT determined to not let blowout loss to Sweden derail its gold-medal...
Sports 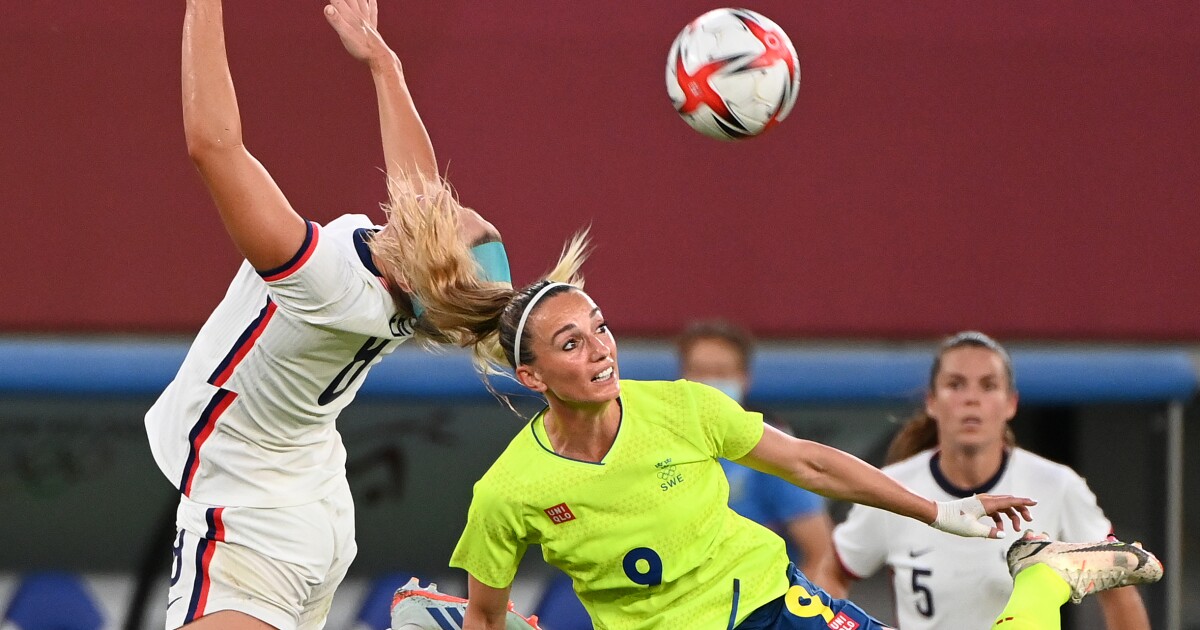 The U.S. women’s soccer team started the Tokyo Olympics the same way it ended the Rio Games: by losing to Sweden.

The question now is what does it do next?

In 2016, the U.S. played Sweden to a draw in the quarterfinal before losing on penalty kicks. It was the first time the Americans’ tournament run finished short of a gold-medal game. Wednesday’s 3-0 loss in Tokyo Stadium came in the opening game of the group stage, leaving the U.S. with plenty of time to regroup and plot its revenge.

“Last thing I would want to be right now is the next opponent of this team,” Abby Wambach, a two-time gold medalist, wrote on Twitter. “Nobody puts baby in the corner.”

Maybe. But nobody on the U.S. side was underplaying the gravity of the situation either.

“We got our ass kicked, didn’t we?” Megan Rapinoe said.

Here’s how bad it was: The loss ended a 44-game unbeaten streak dating to January 2019 and was the first in 24 games under coach Vlatko Andonovski while the three goals — two by Stina Blackstenius and one by second-half substitute Lina Hurtig — were one more than the U.S. had allowed in its last 22 games combined.

It was also the most one-sided defeat since a 4-0 loss to Brazil in the 2007 Women’s World Cup.

“It’s not something we expected,” Andonovski said. “Obviously, we put ourselves in a big hole. But we’re the only ones that can get ourselves out of it.”

They can start that climb Saturday against New Zealand, which opened its tournament with a 2-1 loss to Australia. Fortunately for the Americans the first round of the Olympic tournament is extraordinarily forgiving with eight of the 12 teams — the top two finishers in each of the three groups, plus the two best third-place teams — advancing to the quarterfinals.

A convincing win over New Zealand, one that erases the minus-three goal differential, would put the U.S. in great position to do that heading into next week’s group-play finale with ninth-ranked Australia.

Even that won’t be easy though. The Olympic schedule is tight, with teams getting just two days to recover between games in the hot, humid Tokyo summer. That’s an even bigger challenge for an aging team that starts six players 32 or older.

And even if the top-ranked U.S. survives and reaches the knockout round, which appears likely, it figures to be joined there by seven of the top 10 teams in the world, including the other three semifinalists from the 2019 Women’s World Cup.

But the Americans have done this before. After their only other loss in Olympic group, in the 2008 Games in Beijing, they ran the table to win the tournament.

The U.S. may have to make some changes to get that done again. Against Sweden the Americans seemed a step slow, defended lazily and passed to Sweden almost as often as they passed to one another. They can and do get away with that kind of aimless, uninspired play against the likes of Mexico, Jamaica, Argentina and Colombia, teams it routed earlier this year. But against fifth-ranked Sweden, they paid for those mistakes.

“We were giving the ball away, and they were capitalizing on it,” captain Becky Sauerbrunn said.

“There’s so many things we didn’t do well enough. They were better than us in every segment of the game,” Andonovski said.

The U.S. looked confused, uncomfortable and unfocused despite a roster that averages 92 international caps and has 77 games of Olympic experience combined. Seventeen players were on the last victorious World Cup team, yet “we were a little tight, a little nervous” Rapinoe said.

And it started from the opening whistle with Sweden forcing U.S. keeper Alyssa Naeher into four sprawling saves in the first 24 minutes before a well-marked Blackstenius finally beat her, stepping in front of defender Abby Dahlkemper to nod home a perfect right-footed Sofia Jakobsson cross from the edge of the penalty area.

Andonovski clearly missed Julie Ertz, the team’s roadblock midfielder, who is returning from an MCL sprain in her right knee. She came on at halftime, making her first appearance since April, but struggled in the humid weather.

So while there is a road back for the U.S., it’s one filled with potholes, switchbacks and narrow bridges, hazards that will mean disaster if the team doesn’t find its mojo quickly.

“It’s just a tough situation to be in,” Andonovski said. “It’s a little bit of a shock. But everybody’s positive and understands that we still have games ahead of us. We’ve got to bounce back.

“As much as we say we want to forget this game, we have to. And we have to focus on the next one.”

Share
Facebook
Twitter
Pinterest
WhatsApp
Previous articleTokyo Olympics: When, where and how to watch all the events — and which local athletes are competing
Next articleIs the Long Island bridge key for addressing the issues of Mass. and Cass?