What’s the difference between black, white, pink and green peppercorns? 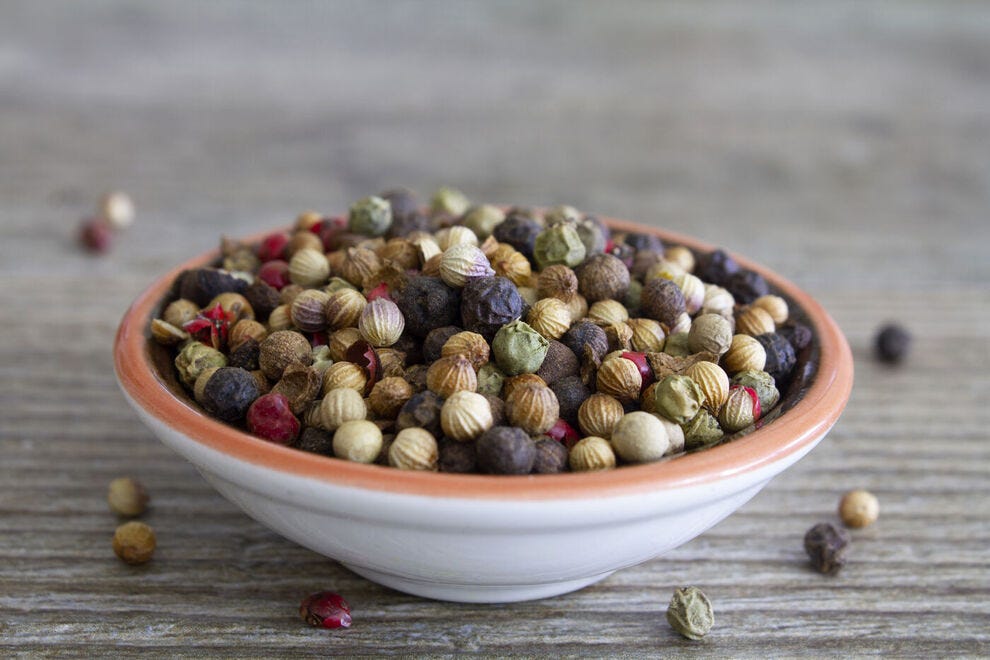 A dash of salt and a few twists of freshly ground pepper are the finishing touches of nearly every savory recipe out there. But when it’s time to grind, do you reach for the black, the white or one of the more colorful varieties out there? Before you can properly pepper, you need to know your peppercorns. Curiously, black peppercorns come from – wait for it – green peppercorns. Freshly harvested green pepper fruit (yes, pepper is vine-growing fruit) turn black after they have been cooked in water and then left to dry in the sun.

Vietnam is the world’s largest exporter of black pepper, though the spice is cultivated across large swaths of Southeast Asia and India.

What they’re best with: Black pepper plays second fiddle only to salt when it comes to the world’s most versatile spices and seasonings. Black peppercorns possess the most concentrated flavor of the bunch and go with just about anything. Fun fact: they can also be used to embalm the dead in a pinch and were prized by ancient Egyptians for their use in mummification ceremonies. With a relatively short shelf life, enjoy these green peppercorns while you can! — Photo courtesy of iStock / Savany

Green peppercorns are pepper in its purest state, freshly plucked from the Piper nigrum vine when not yet ripe. Since they are essentially a fresh fruit, green peppercorns have a terribly short shelf life.

The easiest way to preserve green peppercorns is to soak them in oil or vinegar. They’re grown in all the same spots as black pepper but are primarily consumed in Thailand.

What they’re best with: Fresh green peppercorns make their way into delicate sauces that are often served atop tropical seafood. Here in the States, you’re most likely to encounter them paired with salmon or pork. Believe it or not, white peppercorns were once green then black — Photo courtesy of iStock / pilipphoto

These tiny white spheres start out as green peppercorns that have been soaked then dried in the sun. Critically, the thin skin of the peppercorn is then removed to reveal its ashy white core. White pepper will usually cost you a little bit more, as there’s an additional step involved in their harvesting and preservation.

What they’re best with: Less robust than black pepper and earthier than their green cousins (or are they “parents”?), white pepper is called for in recipes for sauces like bechamel and alfredo, as well as mashed vegetable dishes like potatoes and cauliflower. The pink variety isn’t technically a peppercorn, but don’t let that stop you — Photo courtesy of iStock / Andreas Steidlinger

Pink peppercorns are technically not a peppercorn at all. In fact, they’re genetically closer to a cashew than the pepper spice family. But because of their similar shape and size to true peppercorns, they’re marketed as a pink part of the family.

These blushing beauties are actually the ripe berries of the Peruvian (or Brazilian) pepper tree. As such, you’re most likely to encounter them in South America. Pink peppercorns are simply plucked, then left to dry in the sun before being bottled up and sold.

What they’re best with: These pink peppery cousins have a significantly lighter flavor profile than any of the real deals. Their delicate taste pairs perfectly with their ruby hue, making them a frequent addition to desserts, sauces or even chocolate bars. Pink peppercorns, however, most certainly do not pair well with people who have tree nut allergies. As they begin to appear in more and more North American restaurants, allergy sufferers should keep a watchful eye.